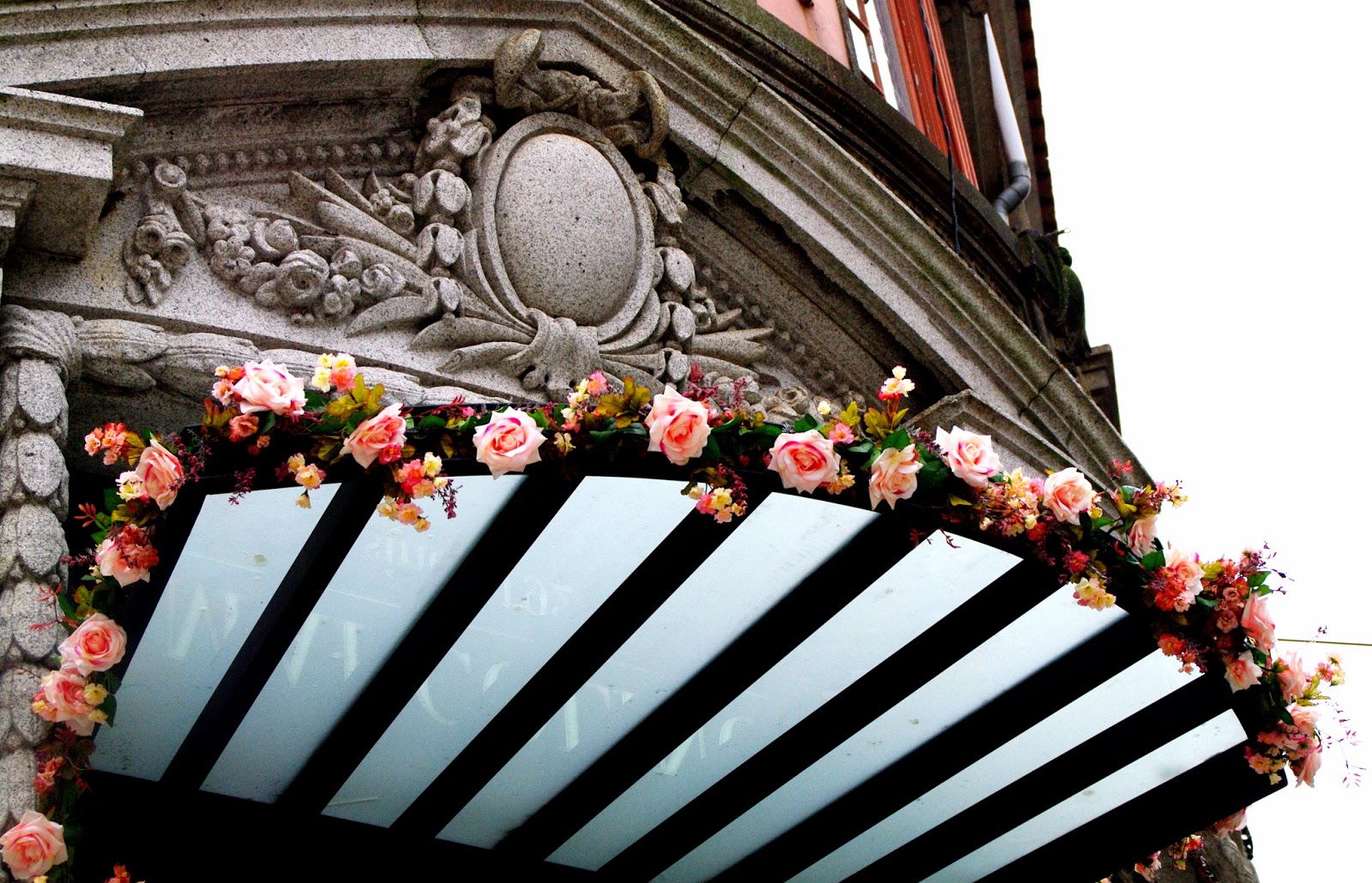 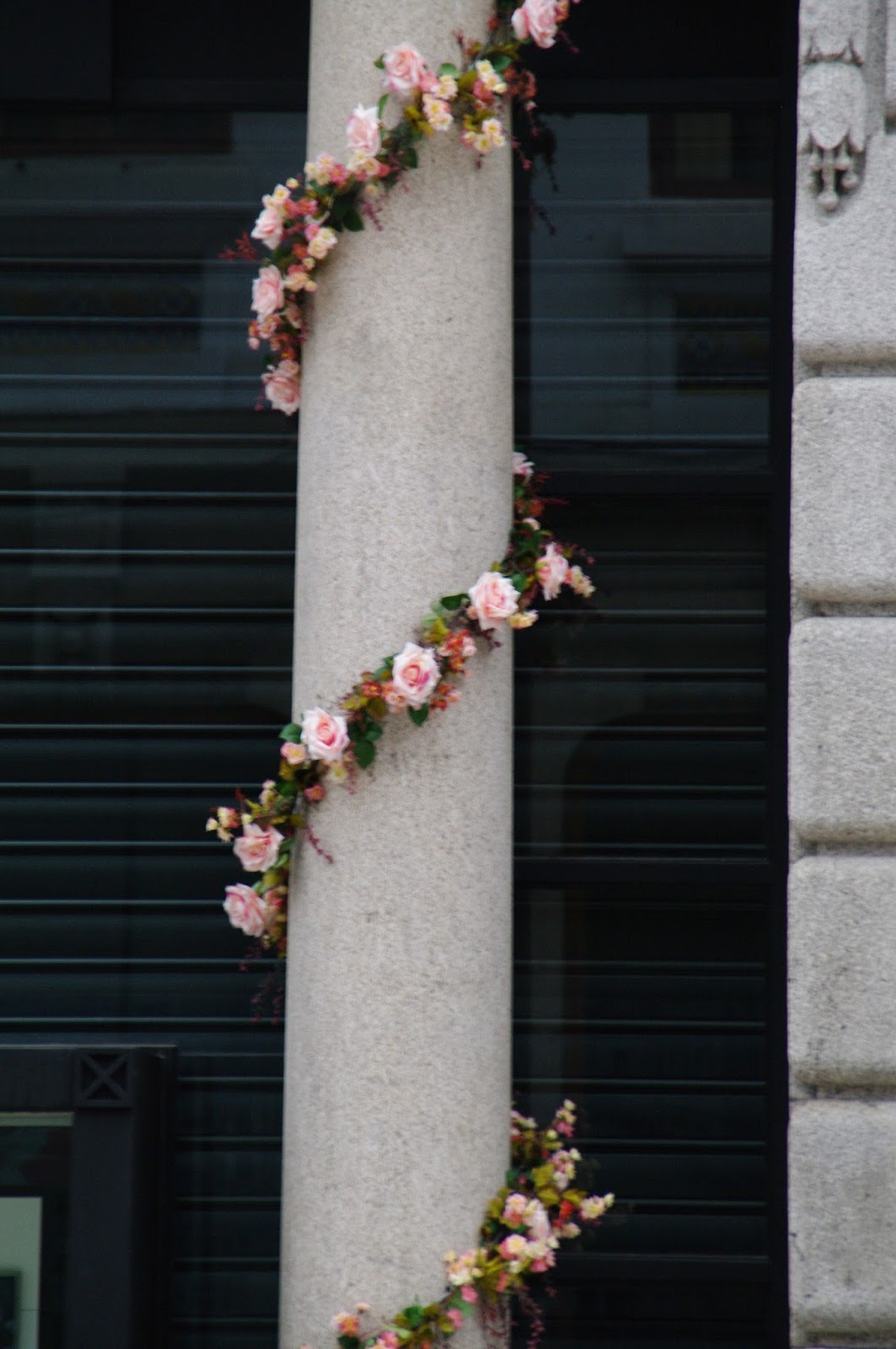 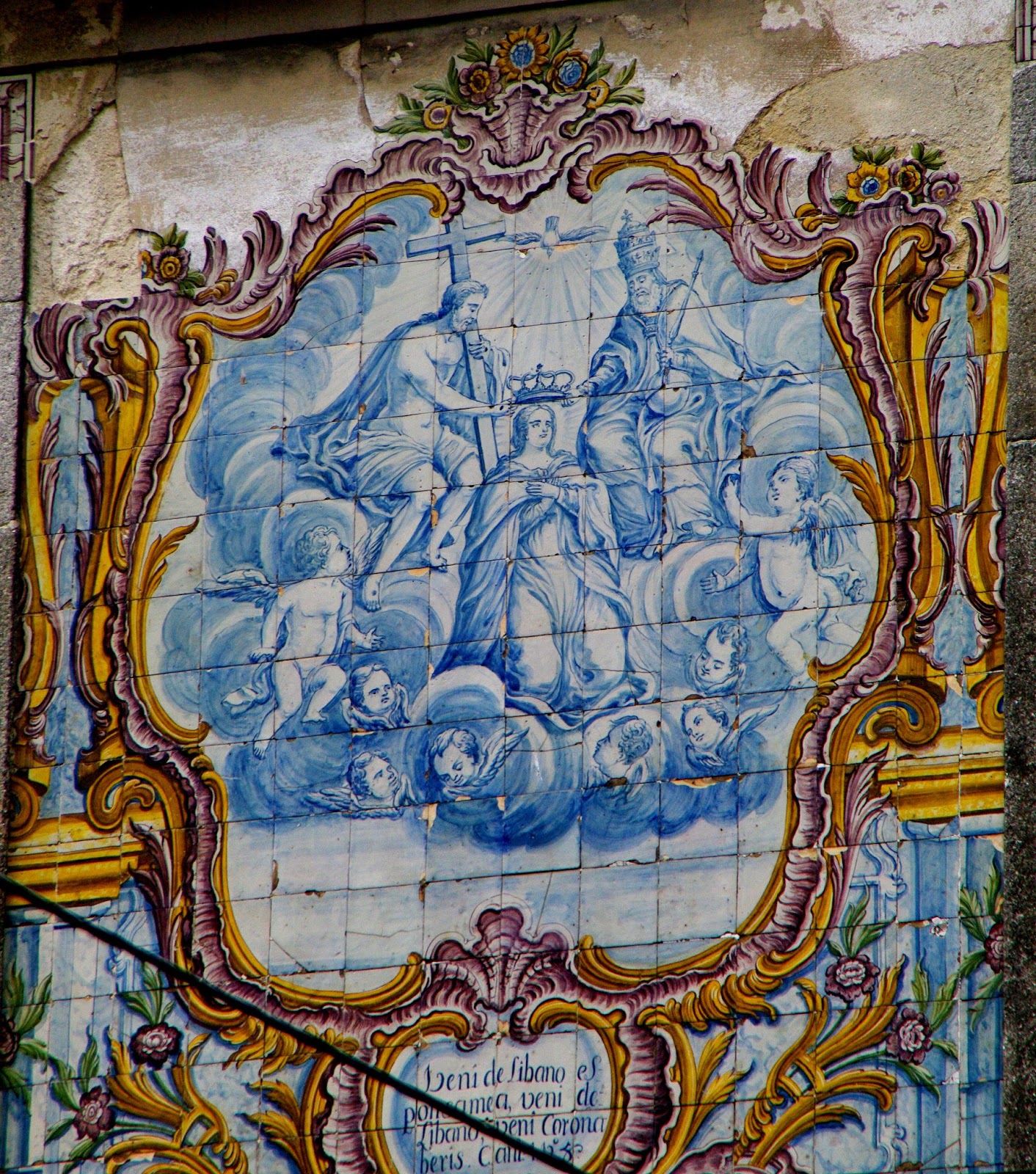 I awoke early on my final day in Porto to take in some of the history and even snuck in a cheeky bit of shopping.  How I managed to fit more into my already stuffed full suitcase will forever remain a mystery.  I began my day at Palácio da Bolsa, a financial building, which allows for tour groups.  I was lucky to find myself in a three person group, with two Spaniards.  Which meant my pour tour guide had to repeat everything once in Spanish and again in English for myself.  I was very impressed though with her grasp on the three languages, I wonder how many more she knows.  The Palácio da Bolsa is stunning, my favourite room is decorated to appear arabic, though actually designed by a Portuguese artist.  Some of the Arabian-looking  words aren’t actually words at all.  The room was designed to emit a cosmopolitain air in order to appeal to investors from around the globe. 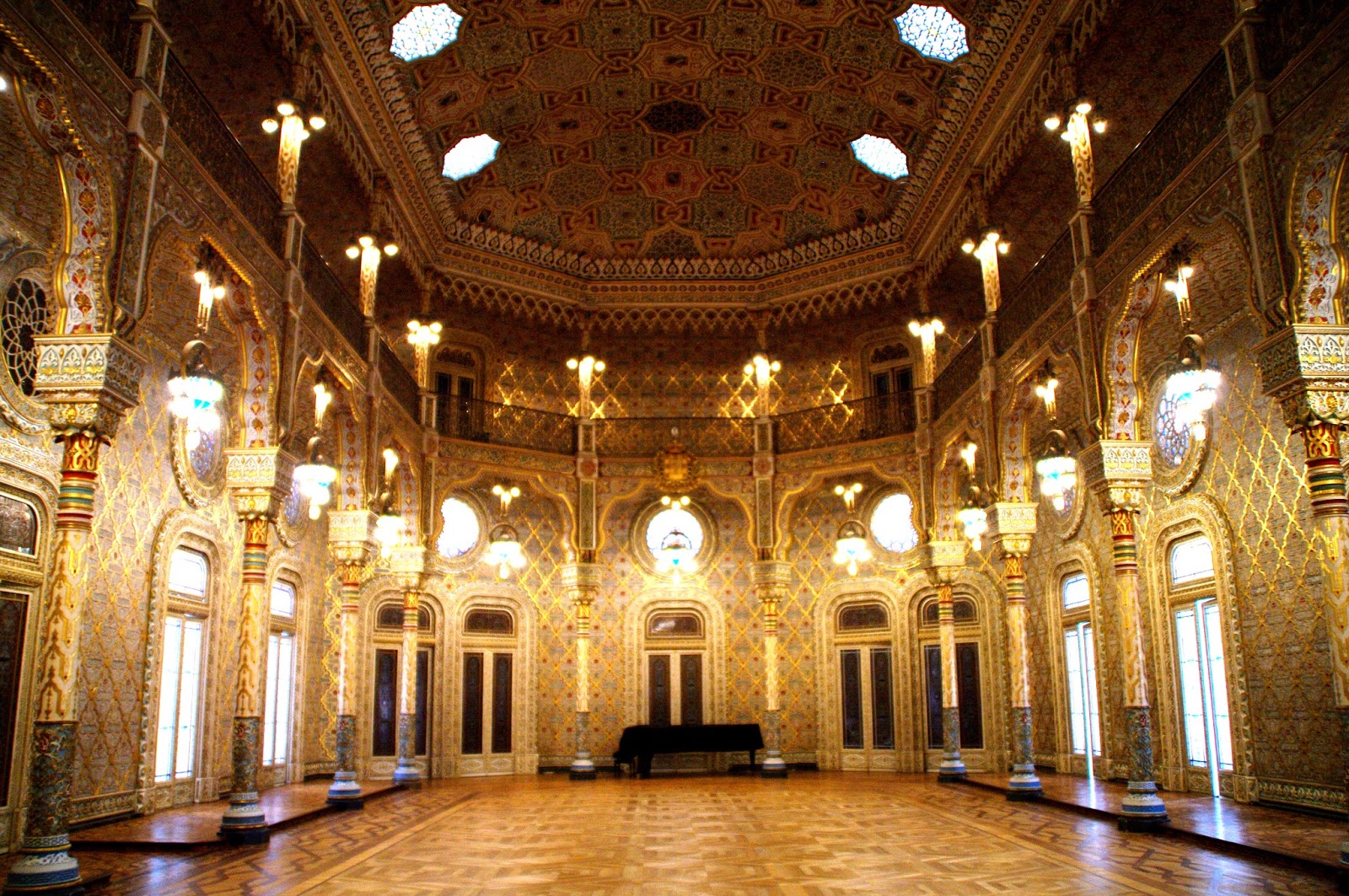 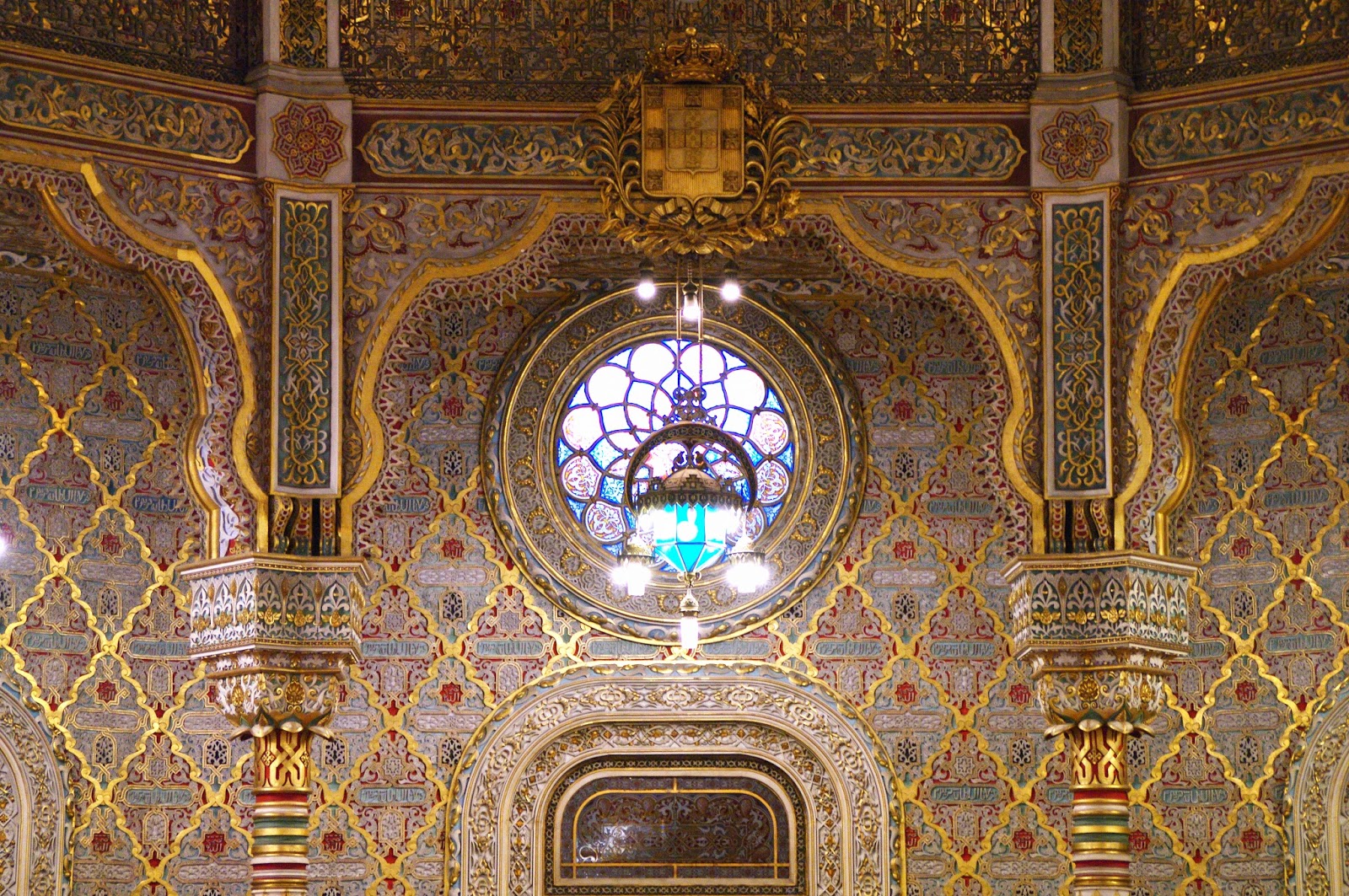 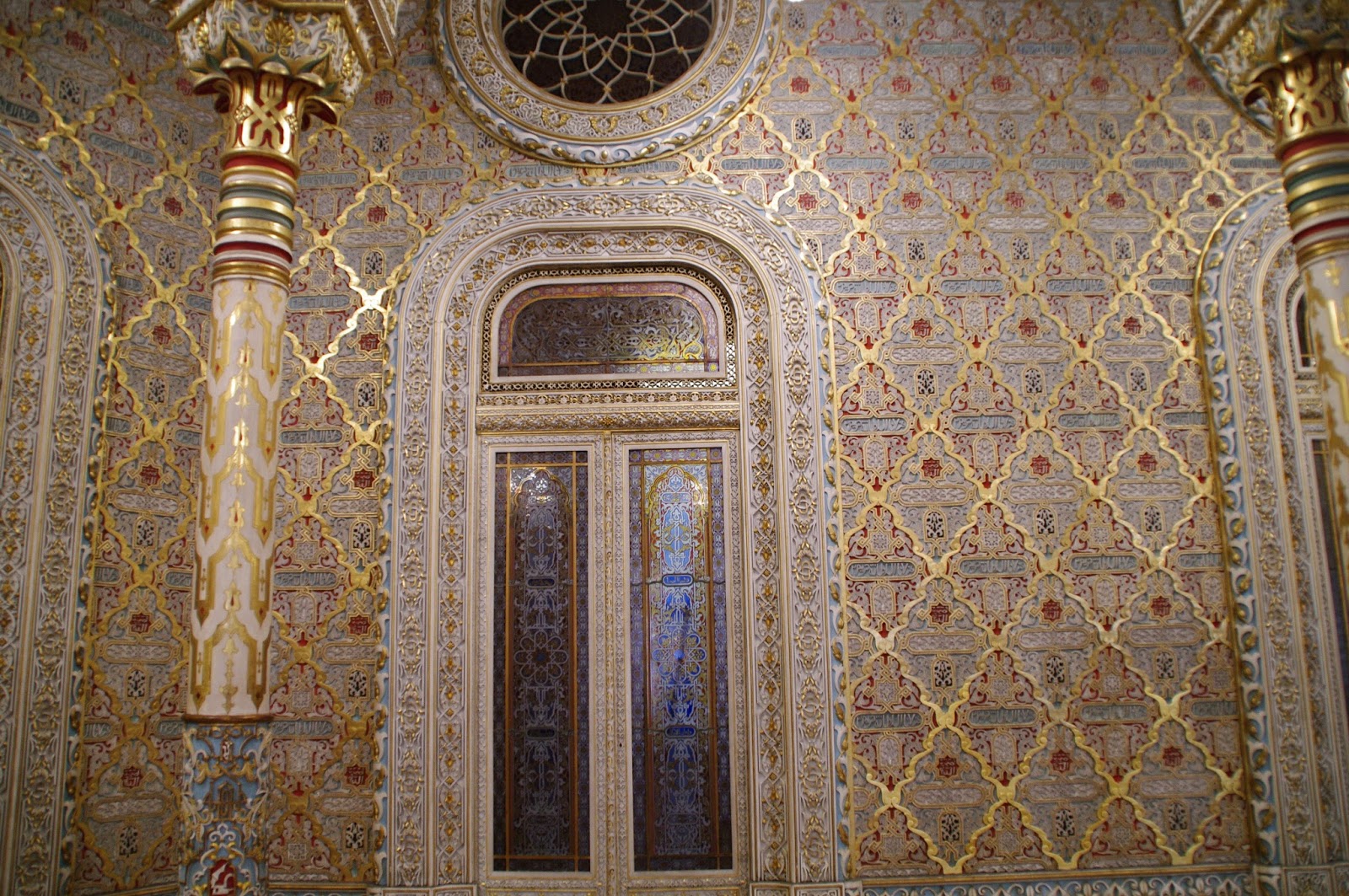 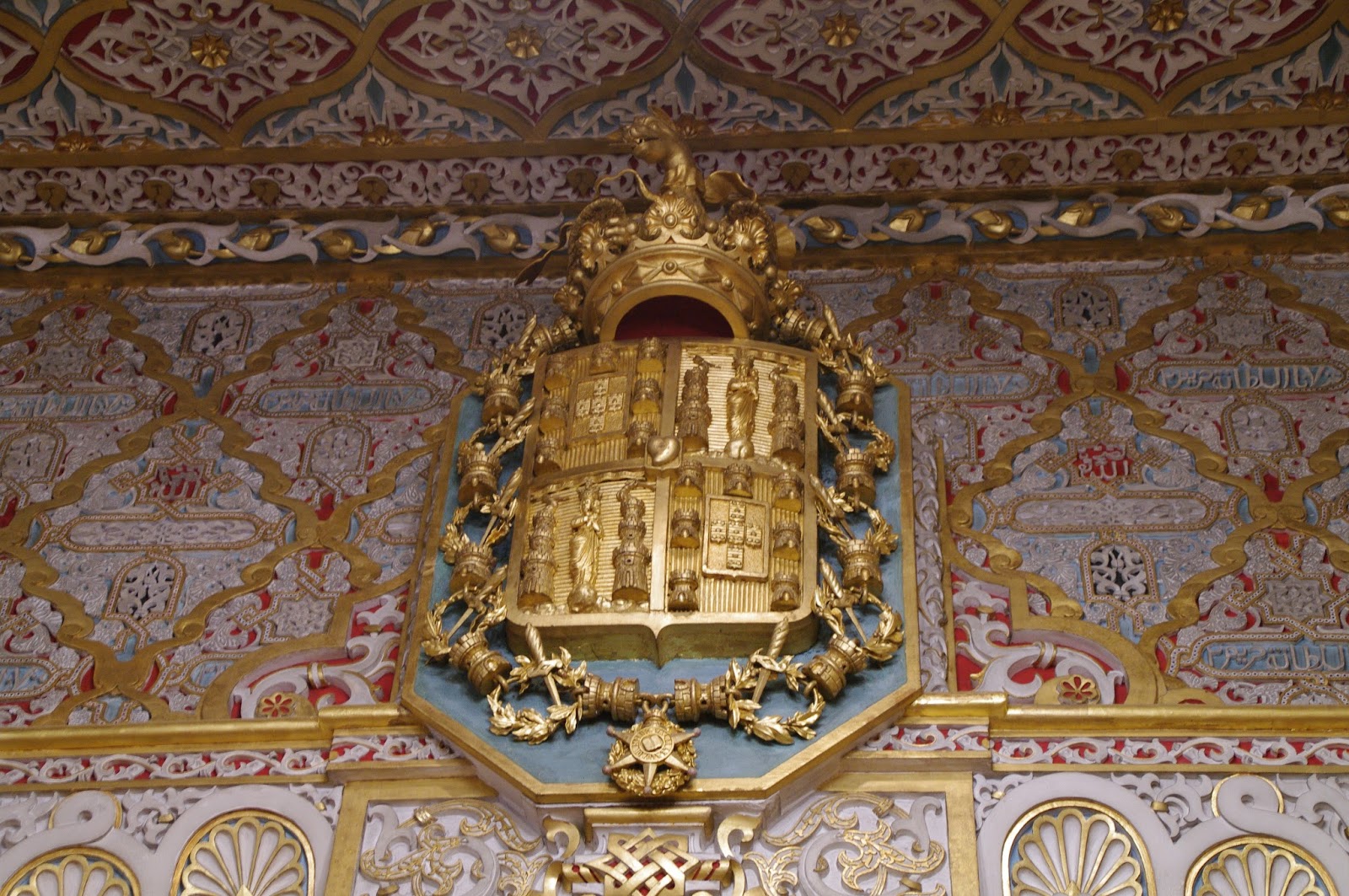 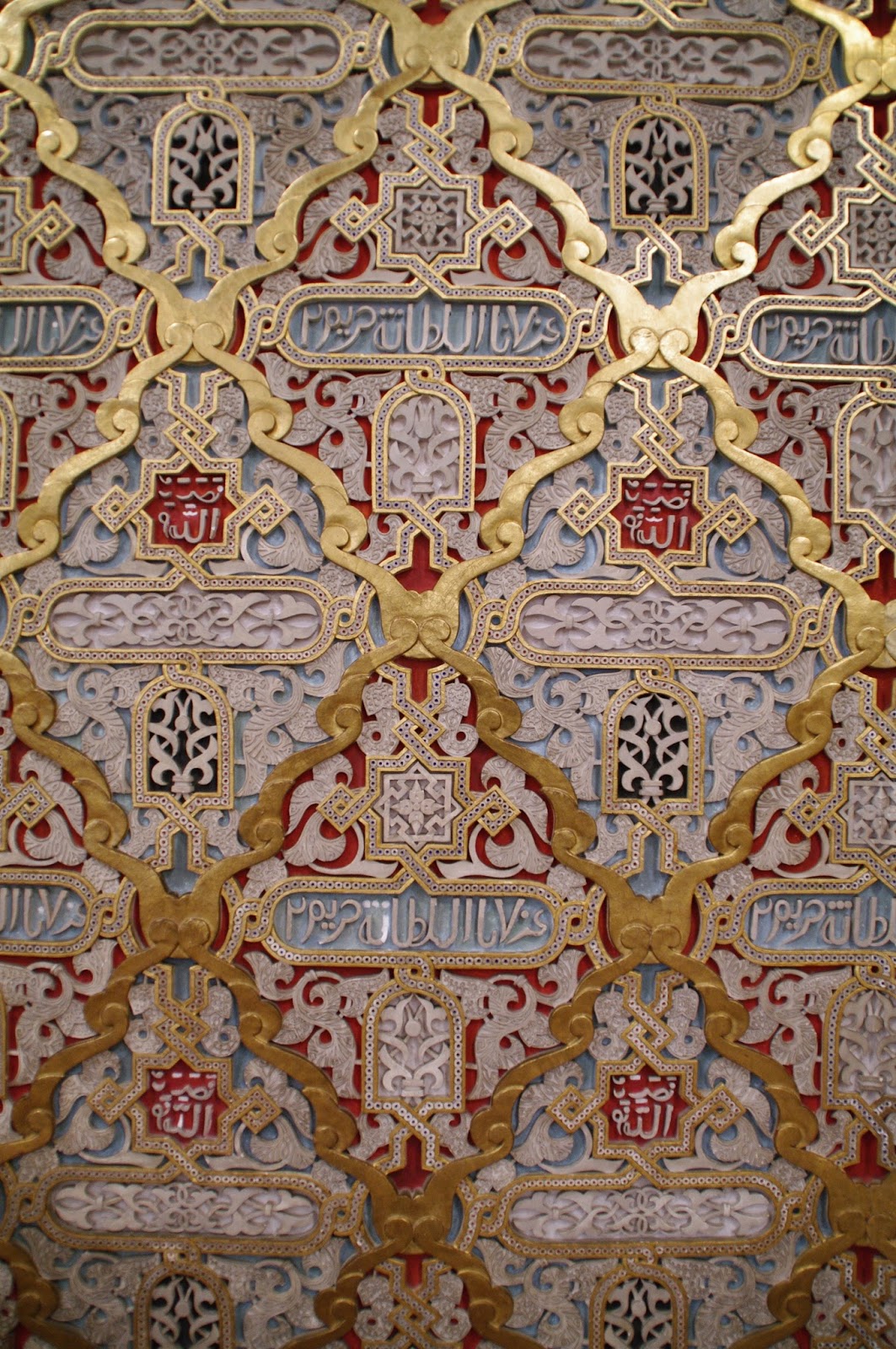 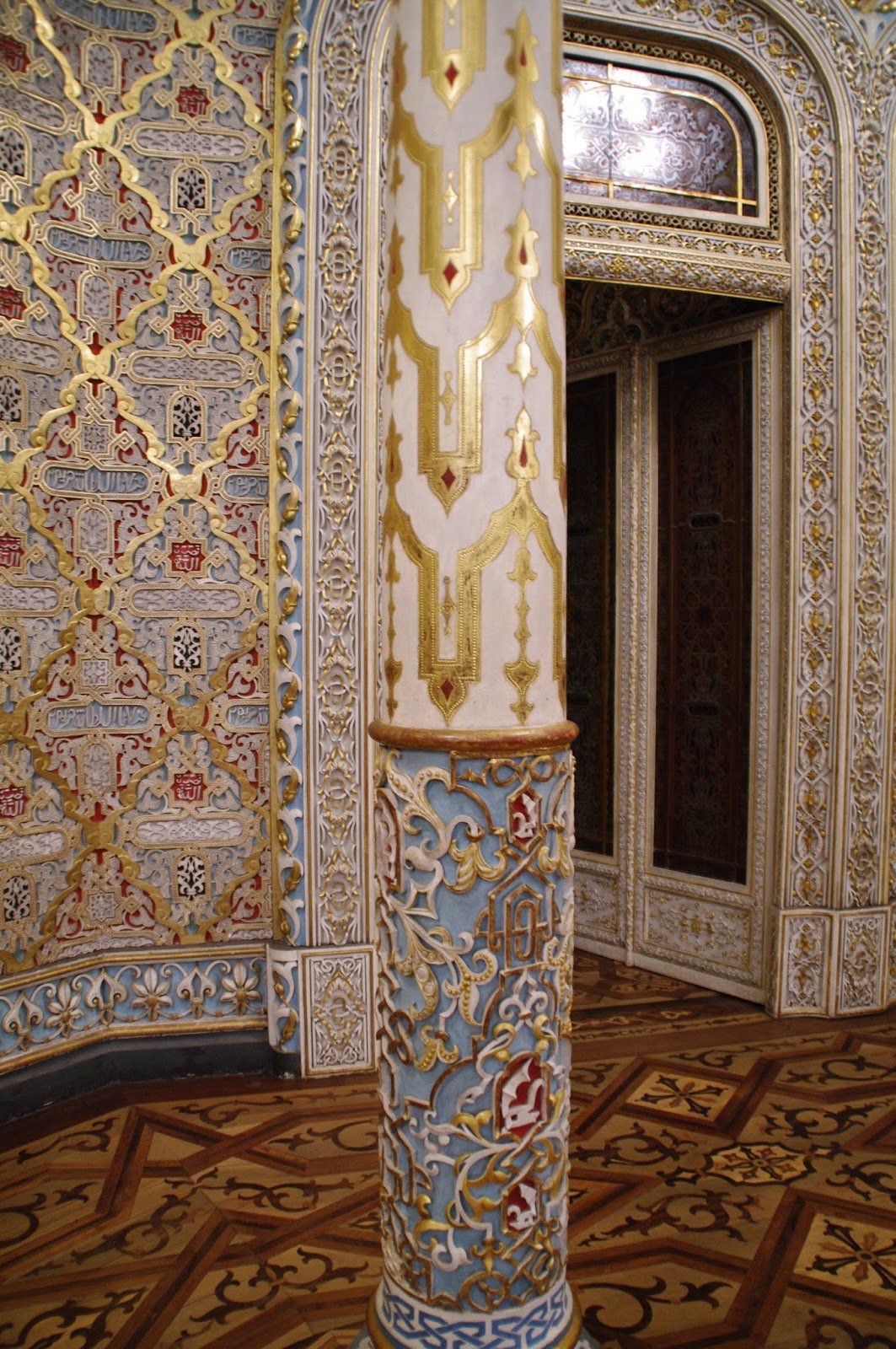 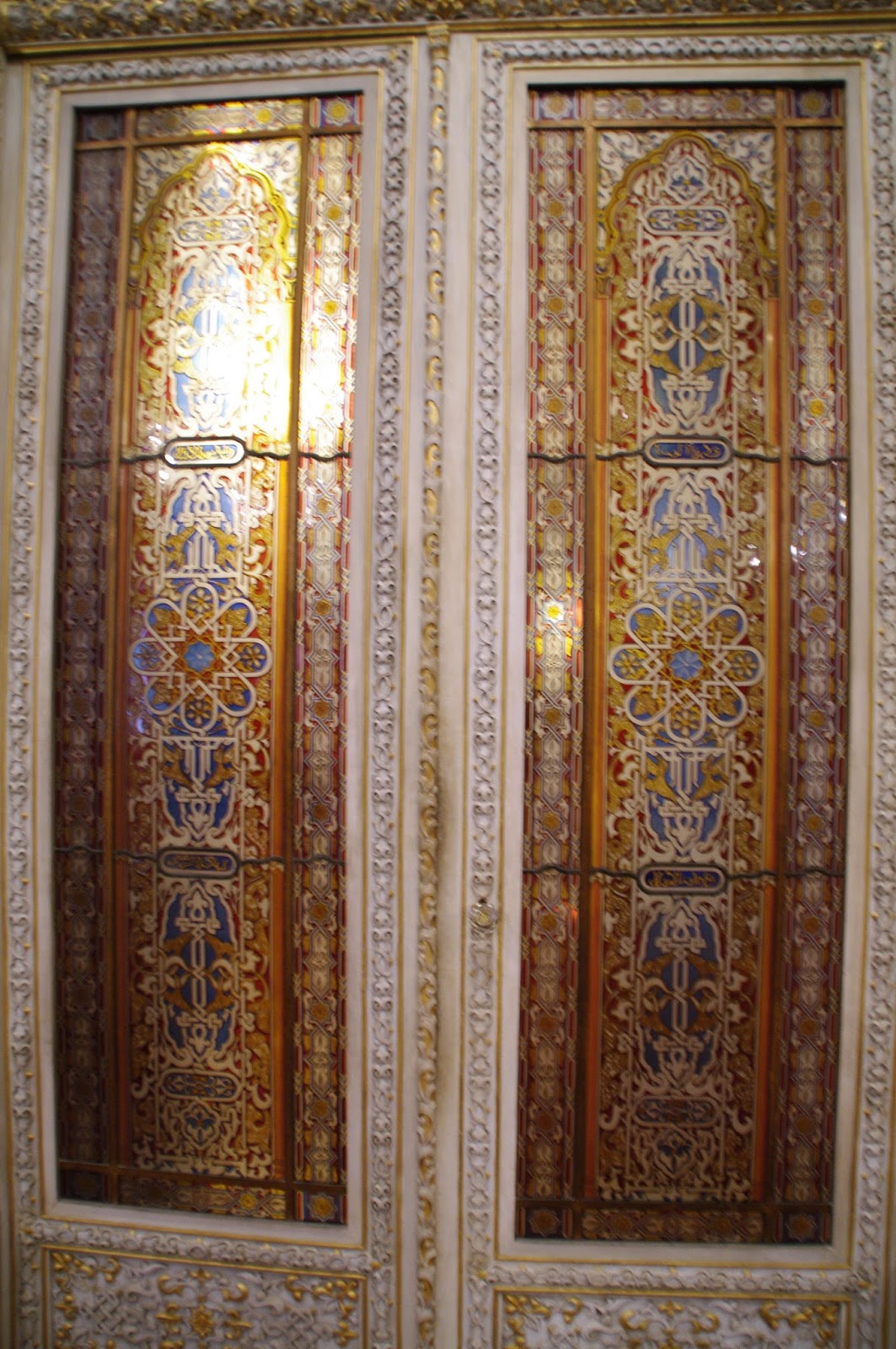 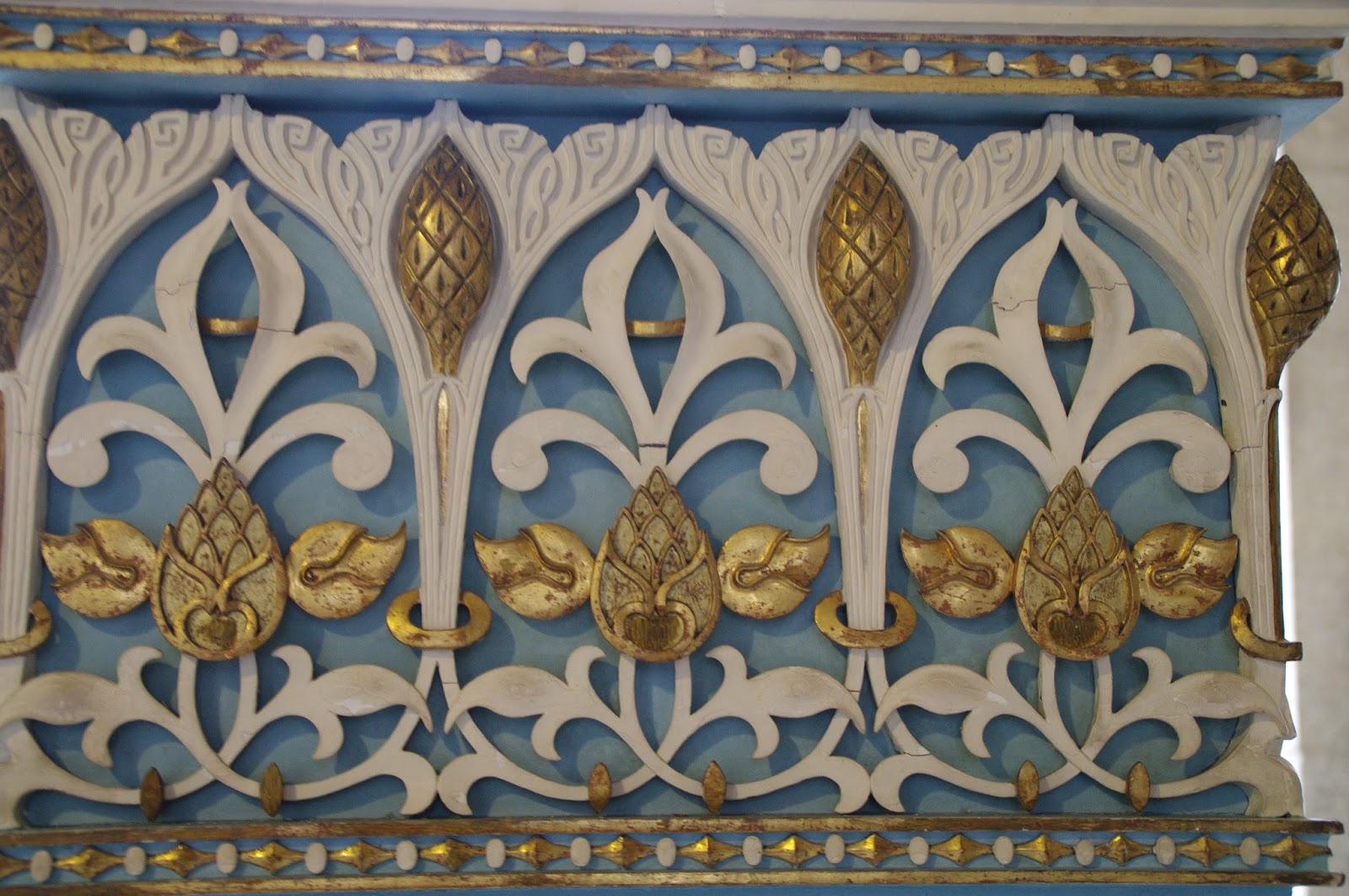 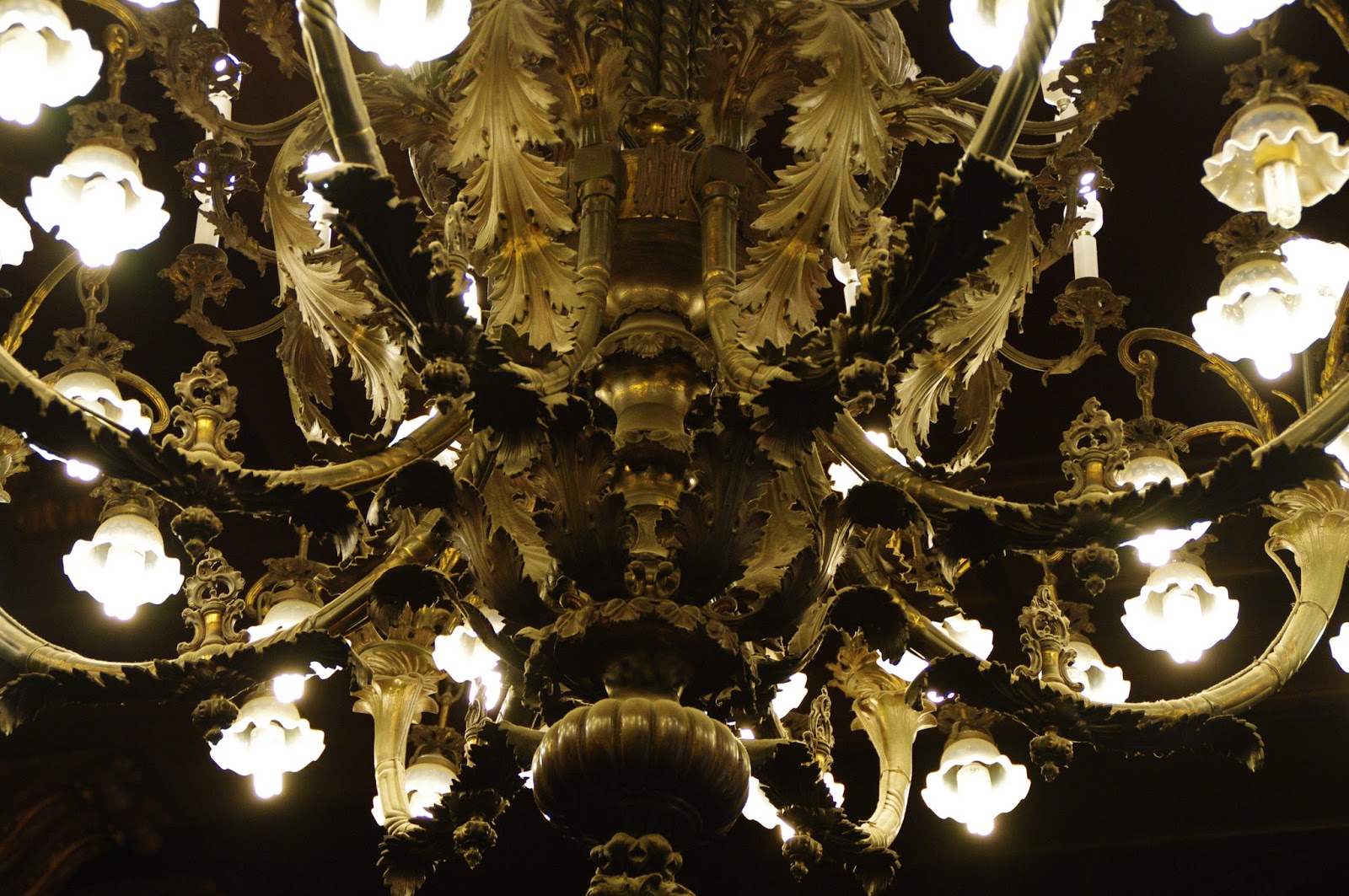 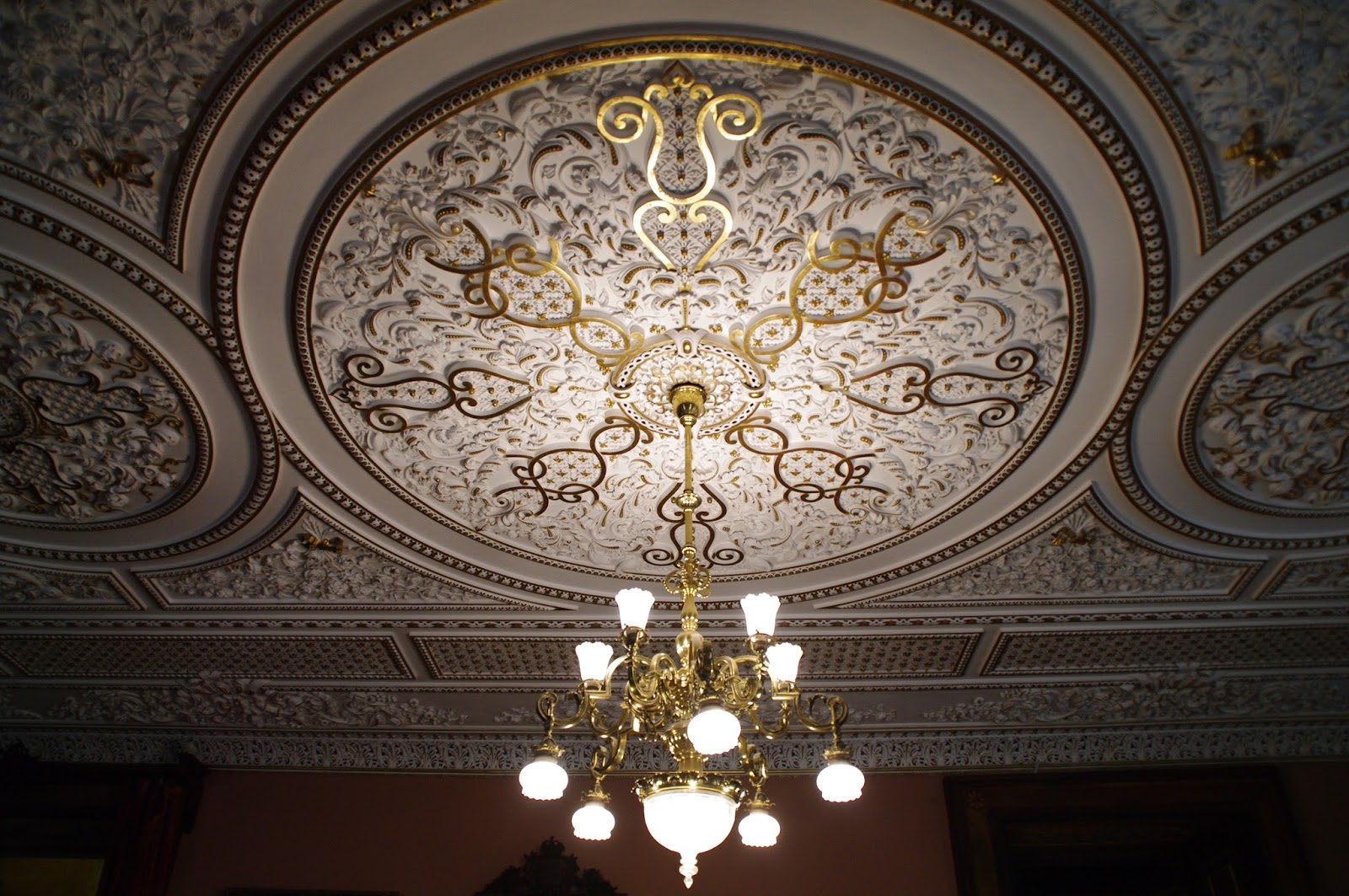 Each of the rooms has a different theme at history.  This room is actually composed entirely of plaster.  The architect wanted to prove he could recreate any material out of plaster.  He did a fine job.  The only issue being, that plaster can chip and thus after wear and tear the walls no longer appear to be wood panelling, white white plaster peaking through.  The tour guide was very informative and funny too.  At one point she pointed to a painting of lady, who was said to be the most beautiful lady in Portugal at the time.  To this she added, “I’d hate to see what the other ladies looked like!” 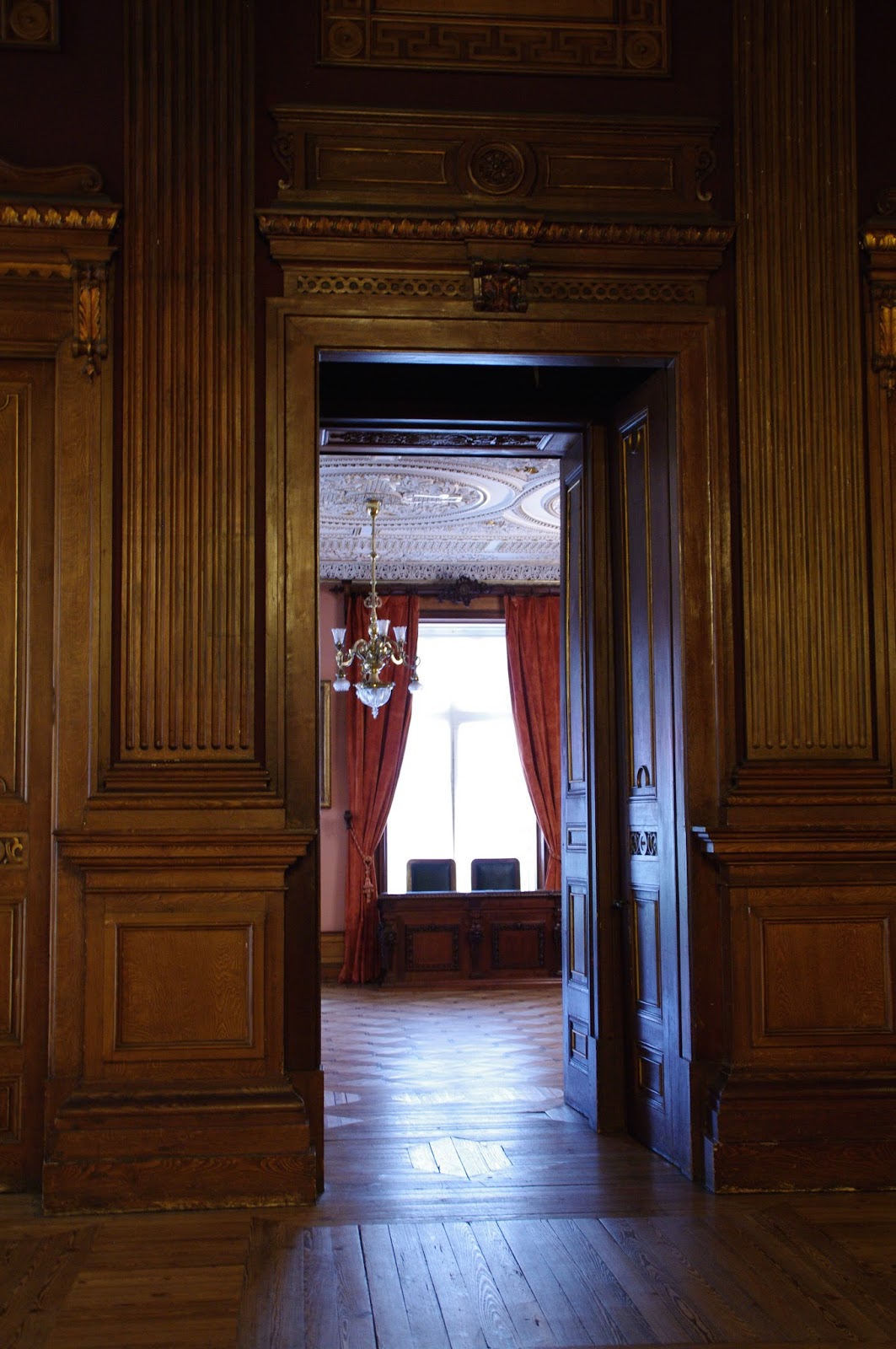 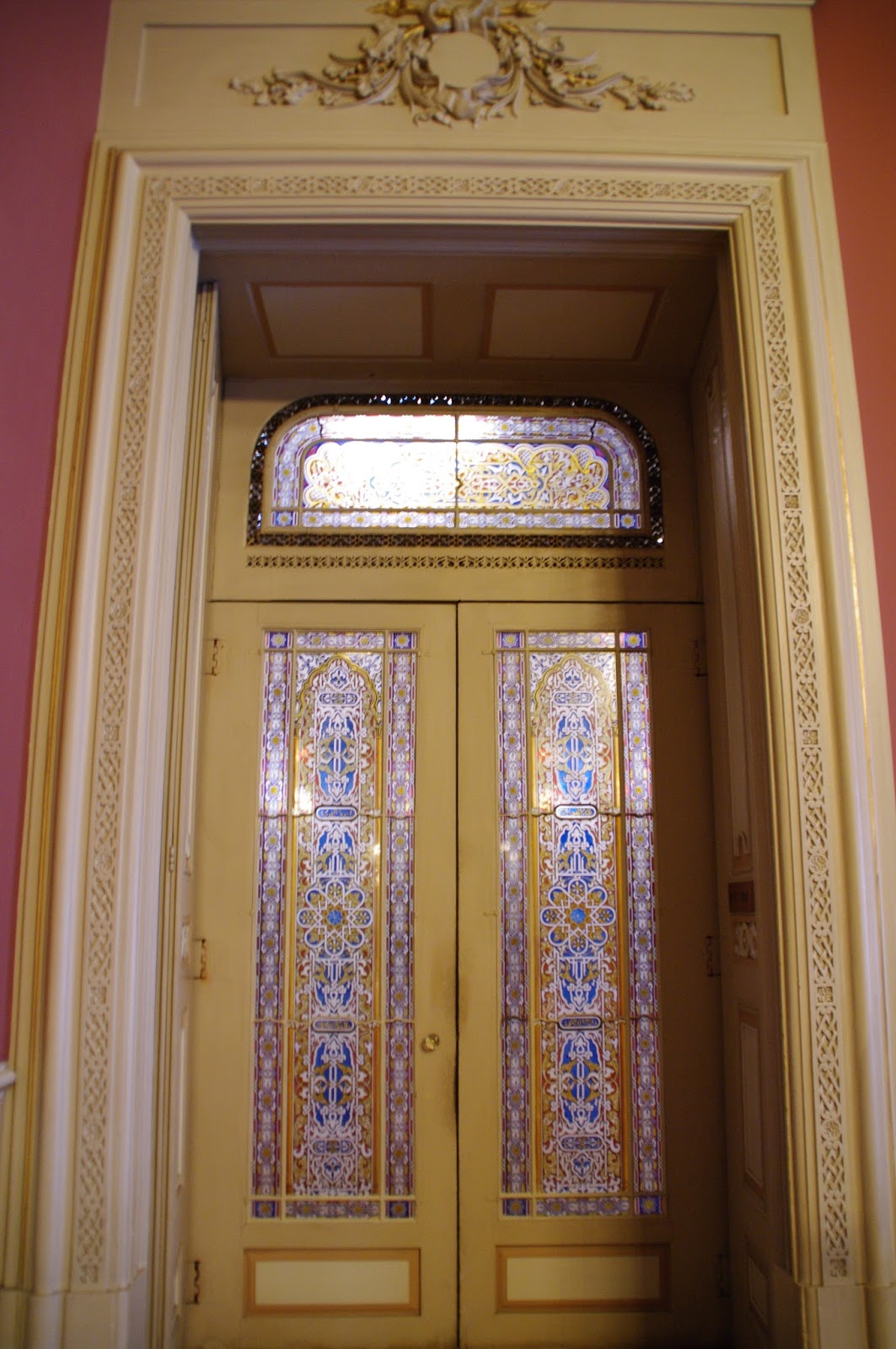 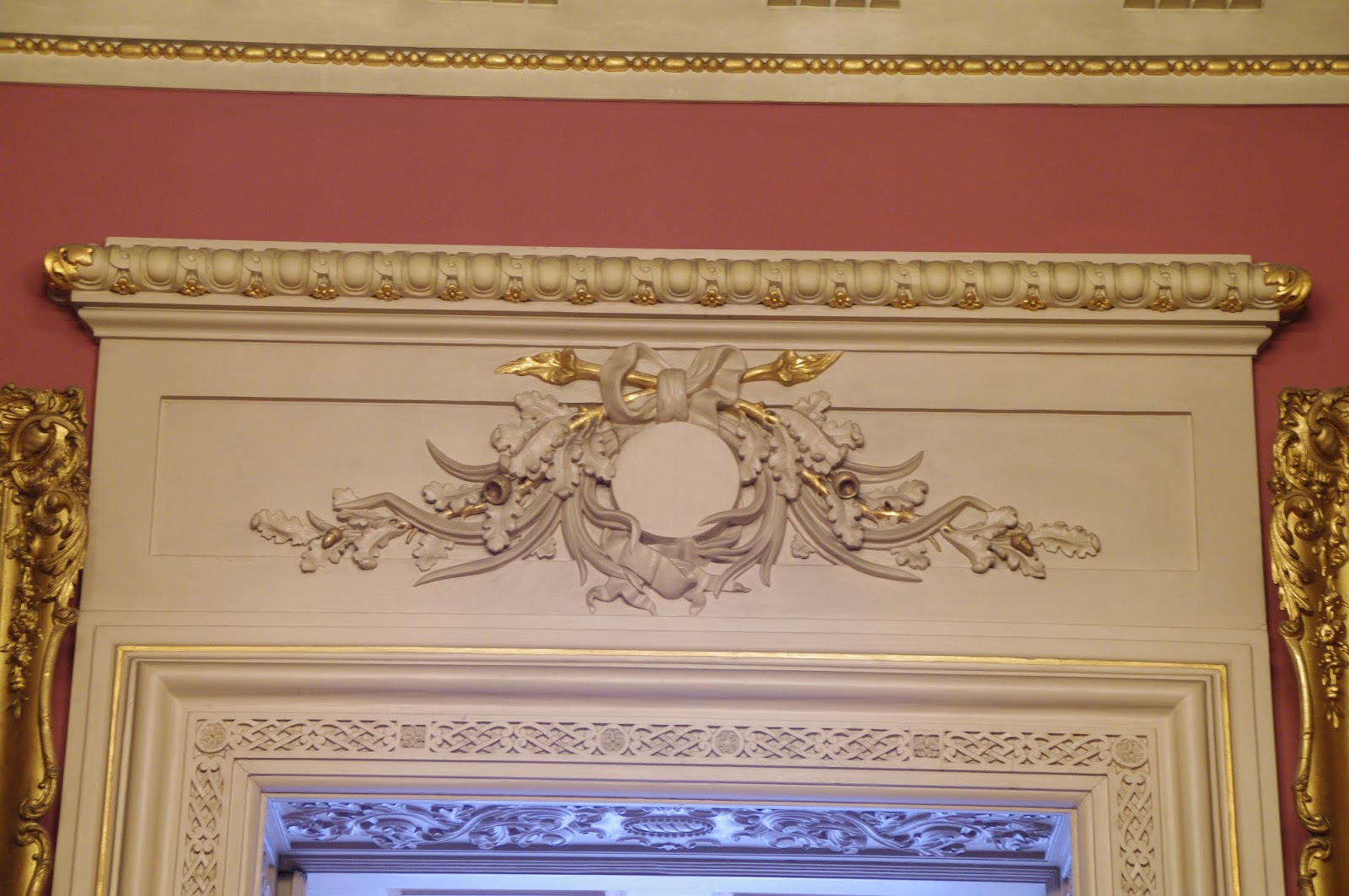 I had consulted the girl who’s AirBnb I stayed at for some sight recommendations while in Porto.  She offered Igreja (church) São Francsisco, conveniently adjacent to Palácio da Bolsa.  With the same ticket one can see the church and catacombs next door.  The church is stunning, though no photography allowed.  It’s very dark inside and reminded me of a beautiful Disney music box I was given at Christmas as a child.  The interior is entirely engraved, with much to take in. 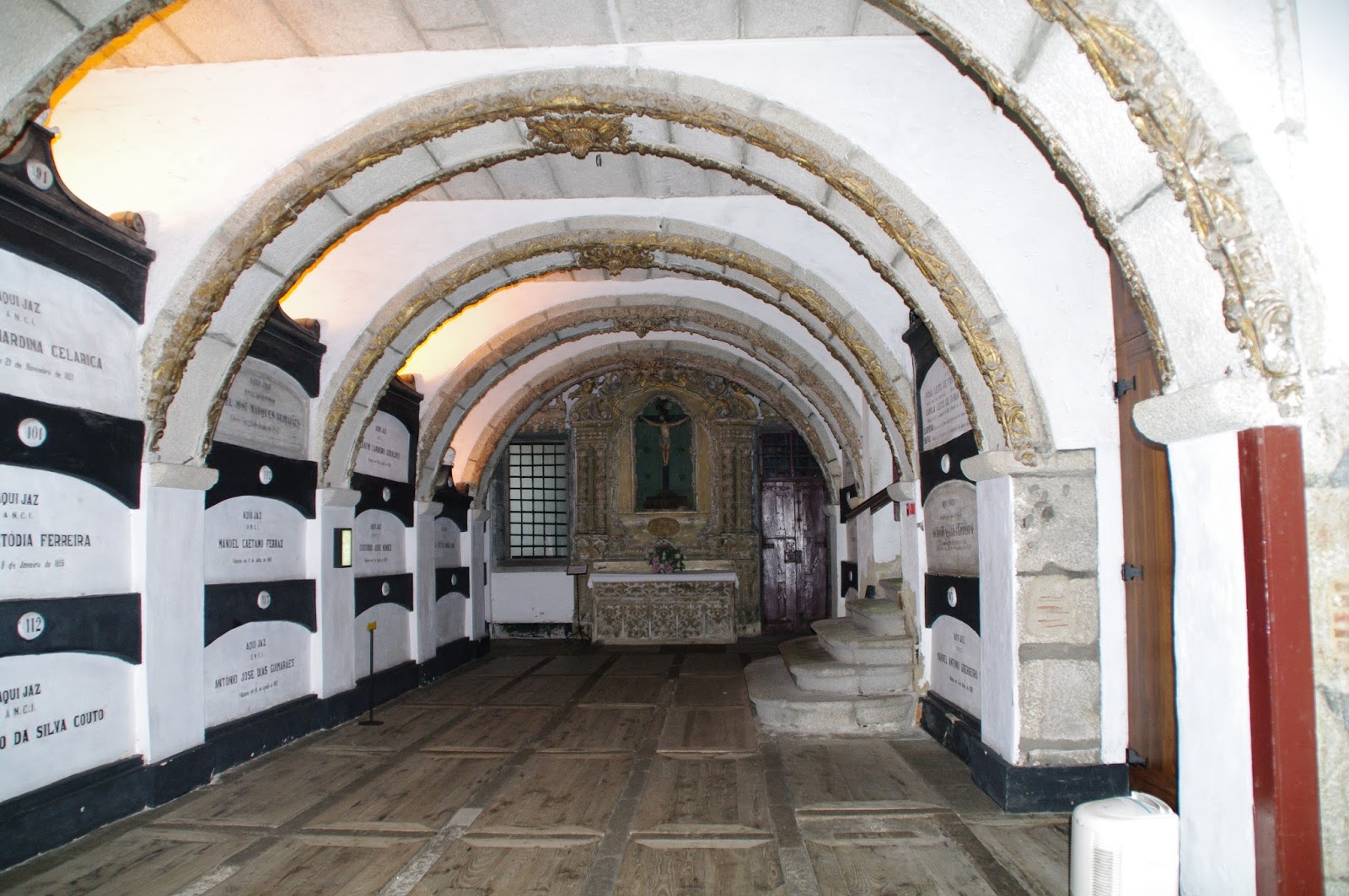 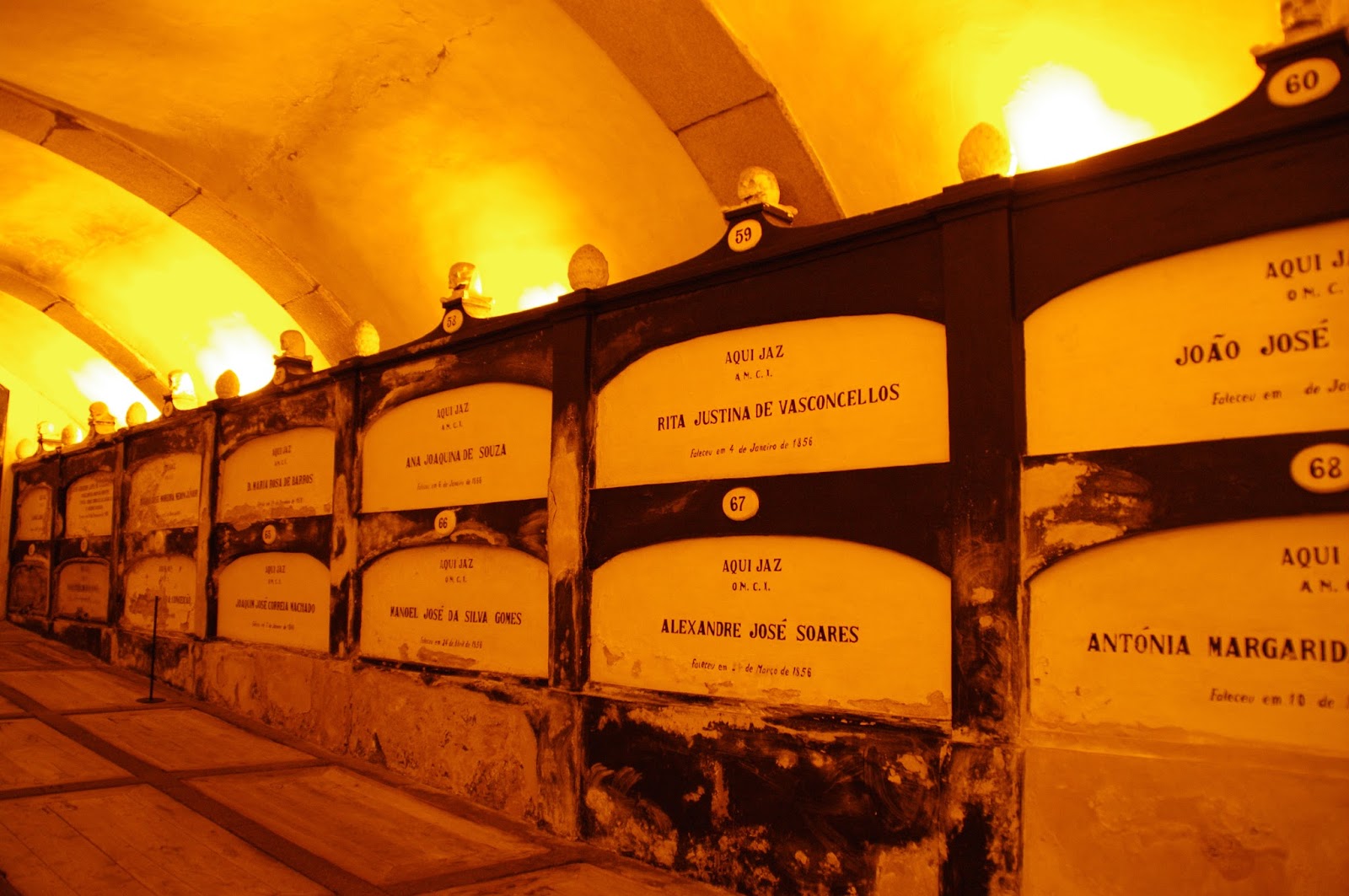 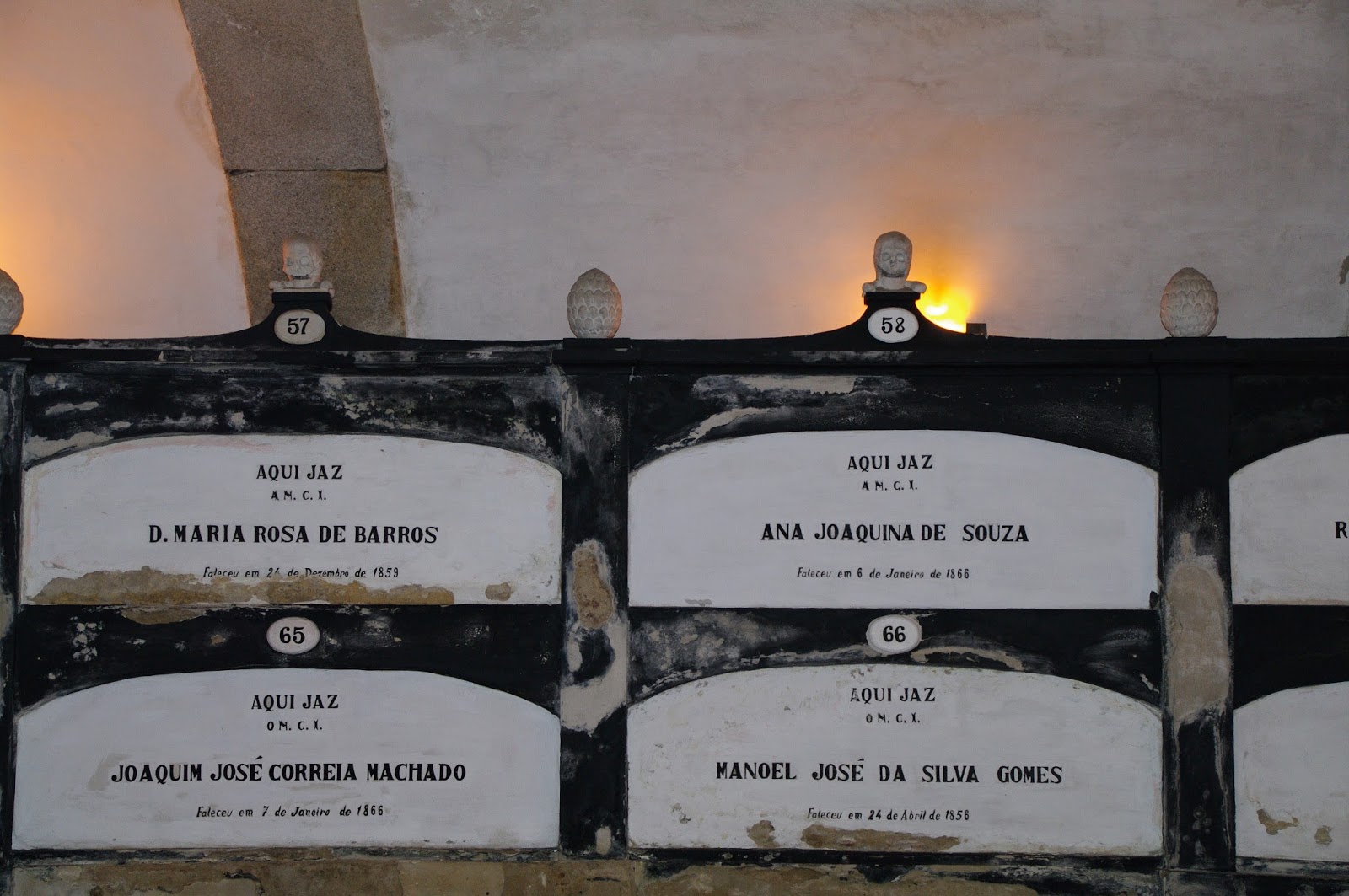 I found it odd that photography was allowed in the catacombs, when it was forbidden in the church.  The former seems more sacred to me, but that’s probably just because I’m a heathen.  The catacombs were very interesting, I’d never seen anything like it, other than while in Spain at El Escorial, though this held a completely different aesthetic.  As I came to the end of a corridor I found an opening in the floor, at which point I realized I had been walking a few feet above the bones of deceased underneath the floorboards! I highly recommend taking a trip up the Clergios (bell) tower in the centre of Porto.  Though I will caution against those with claustrophobia going up.  I was actually astonished that no warning was given about the conditions going up.  It is one snaking stone staircase which winds around the tower all the way up and no separate staircase down.  It is a very confined space and there is no quick exit if you have a panic attack.  It’s about fifteen minutes going up and stopping ever so often to allow those going down to pass by.  Though if you don’t suffer from fear of closed spaces, the view is definitely worth it.  The balcony wraps entirely around the top of the tower, providing a panoramic view of the small city. 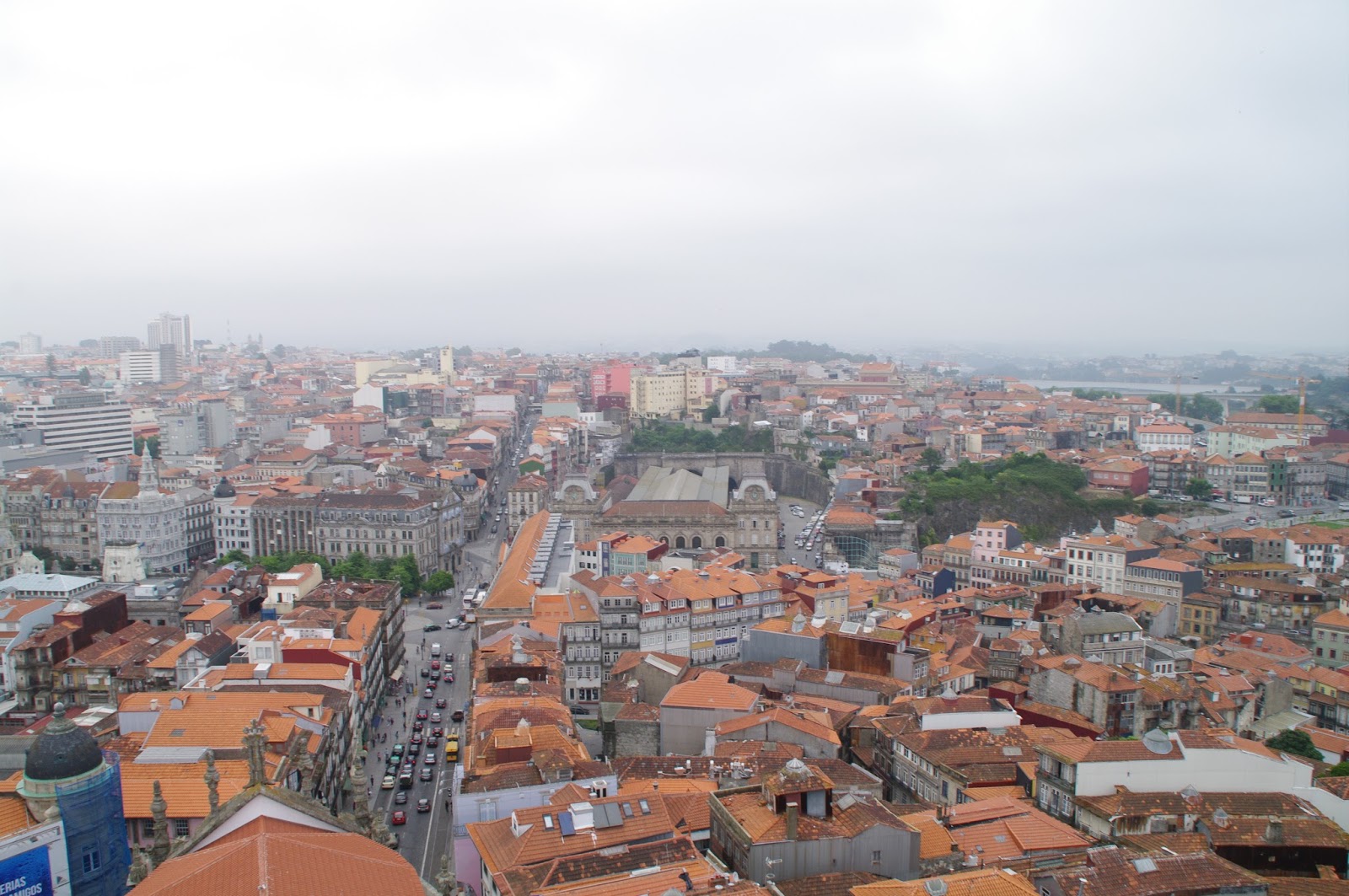 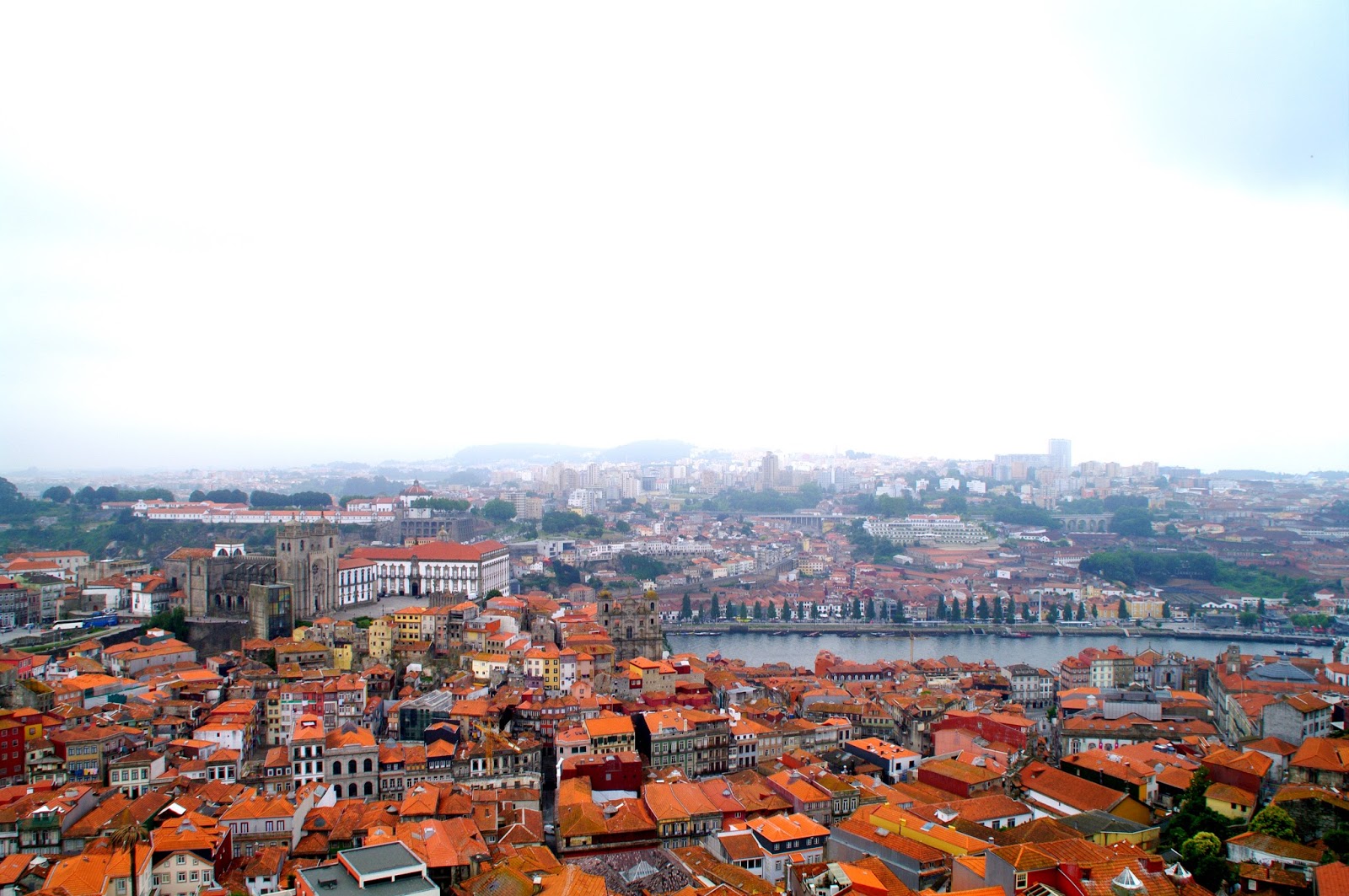 At the bottom of the tower I purchased a necklace with a rooster on it from a local artisan.  The brightly painted rooster can be seen all over Portugal, any one who’s ever been to a Nando’s will recognize it.  The abridged version of the story goes: a Portuguese man was wrongly accused of a crime and sentenced to death.  Hours before being sent to be hanged he had a prophecy and stated that if the (dead) rooster the judge was to have for dinner crowed three times, he was not guilty.  As it happened the rooster did crow and the man was set free!  As I still had some time before catching my flight to Spain I also did a bit of shopping at Zara, ironic as it’s a Spanish brand and I purchased nothing in Spain.

I was lucky to consult many of the Spanish friends about my trip to Porto.  I was given a few desert recommendations and given my sweet tooth couldn’t resist trying them.  I grabbed Bolo de Arroz and Pastel de Belém from a little bakery on my way back to my AirBnb to drop of my keys and grab my suitcase, before heading to the Porto airport.  The Bolo de Arroz is basically a little cake made of rice, which I enjoyed.  I’ve had pastel de bélem before, I believe a Portuguese co-worker brought them in once. 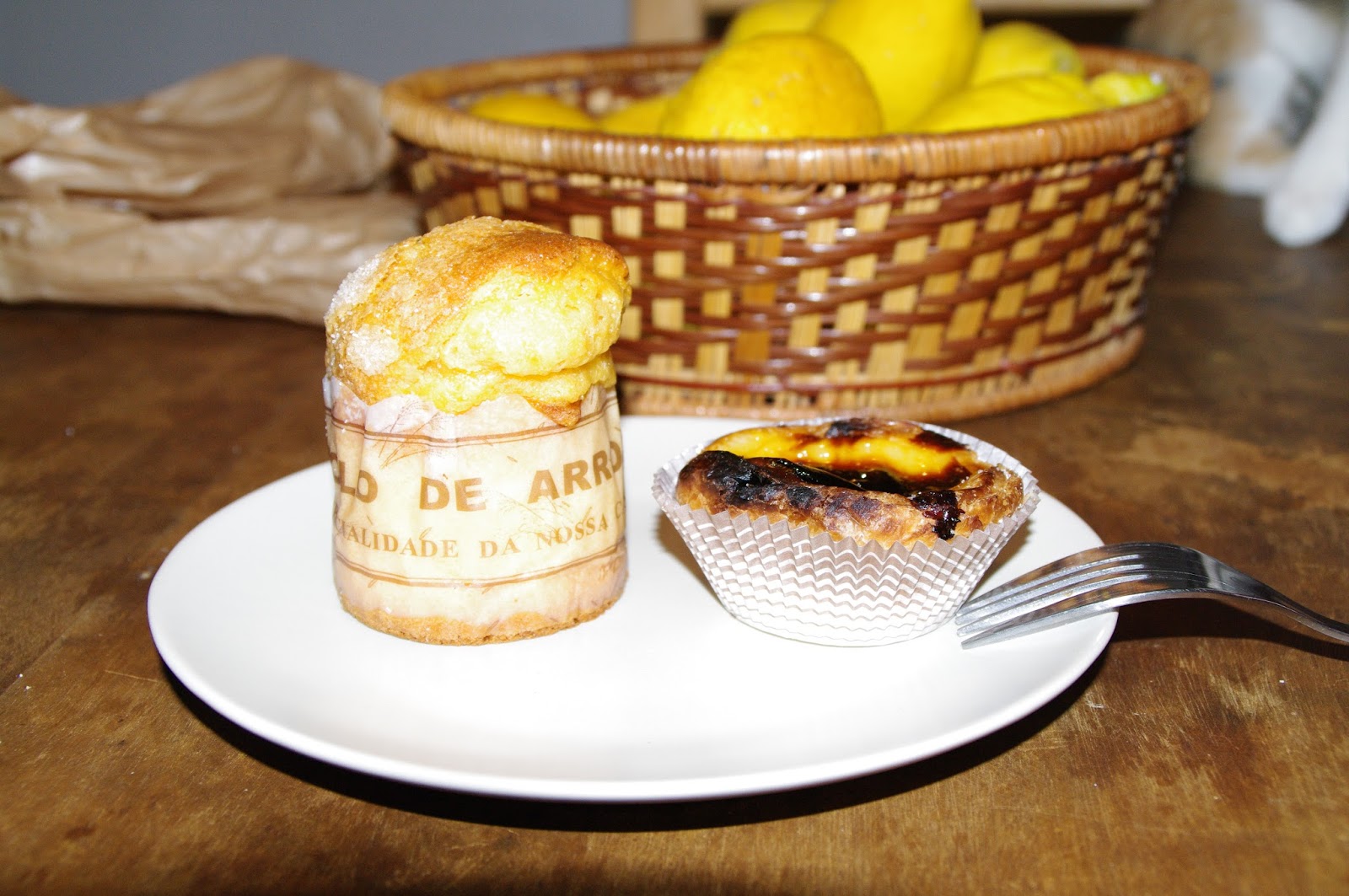 I then trod off to the metro to catch a fight back to Madrid, where my fight to Canada would leave from the next morning.  As I had only been on the metro once before in Porto, I figured it would be just as simple to return to the airport and I caught the first train I saw, which seemed to be heading in the direction I wanted to go.  However, I realized I had boarded an express train, which ceased making stops before I had to make my transfer.  I asked a young highschooler if the train would stop where I needed to make my connection and he seemed quite confident that it would.  However, when it didn’t he also didn’t seem to alarmed.  A woman with two babies made note of my confusion and made attempts to direct me on how to back track.  She ushered me off the train at her stop and explained how to get to the airport with many hand gestures and what English she knew.  I even tried asking her if she knew any French, as I know no Portuguese and very little Spanish.  Eventually she insisted that she drive me to the airport!  I felt awful, having this young mother, her two babies and her mother pack me into their little car and take me to the Porto airport.  Though, not wanting to miss my flight, I conceded.  The only thing I could do was uttered the same and only Portuguese word I had (gratefully) picked up earlier that day “Obrigada!  Obrigada!” (thank you).  I was truly overwhelmed by the kindness of strangers.  I’ll be sure to return to Portugal in the future, it’s one of the loveliest places I’ve been. 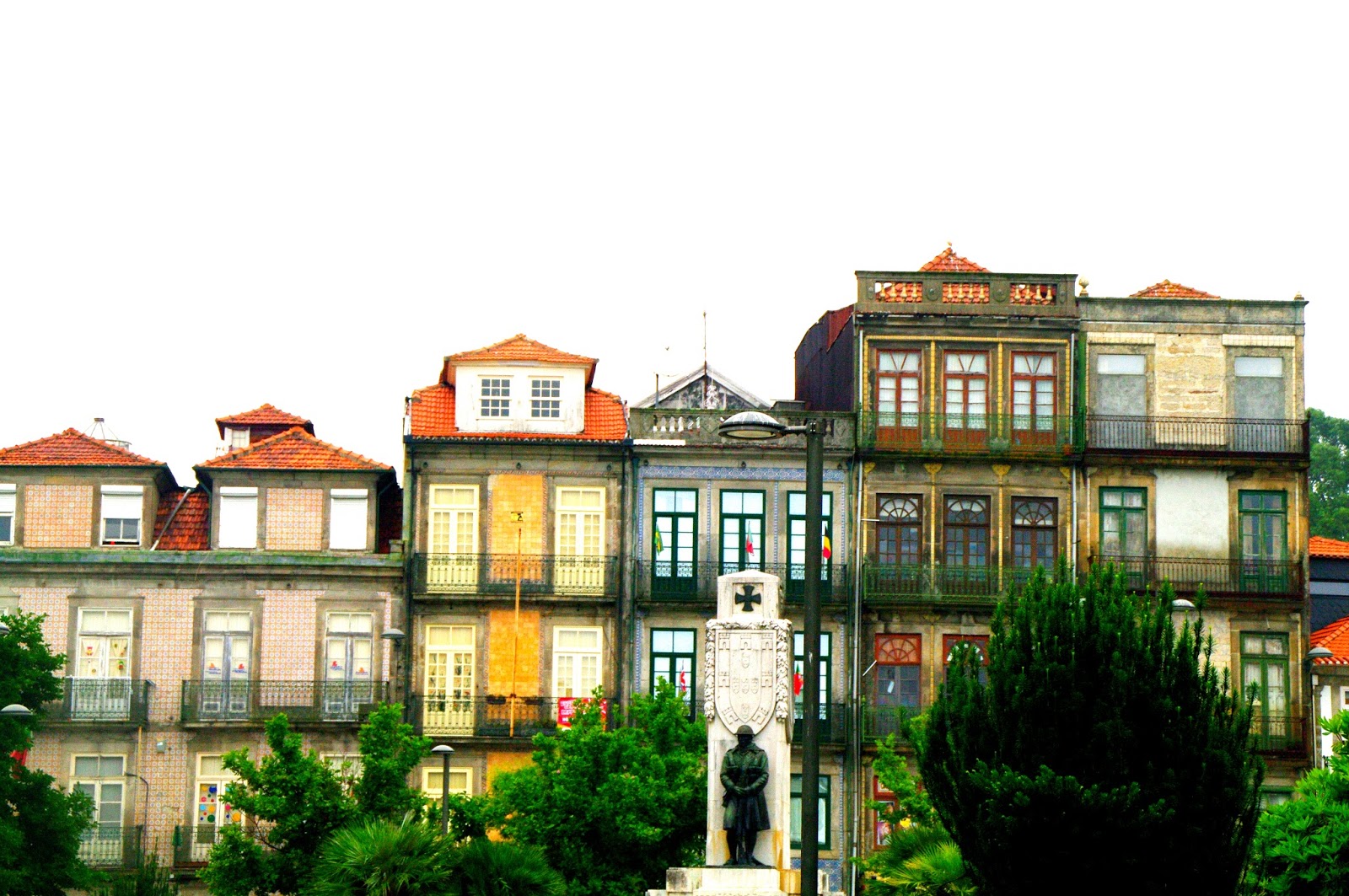