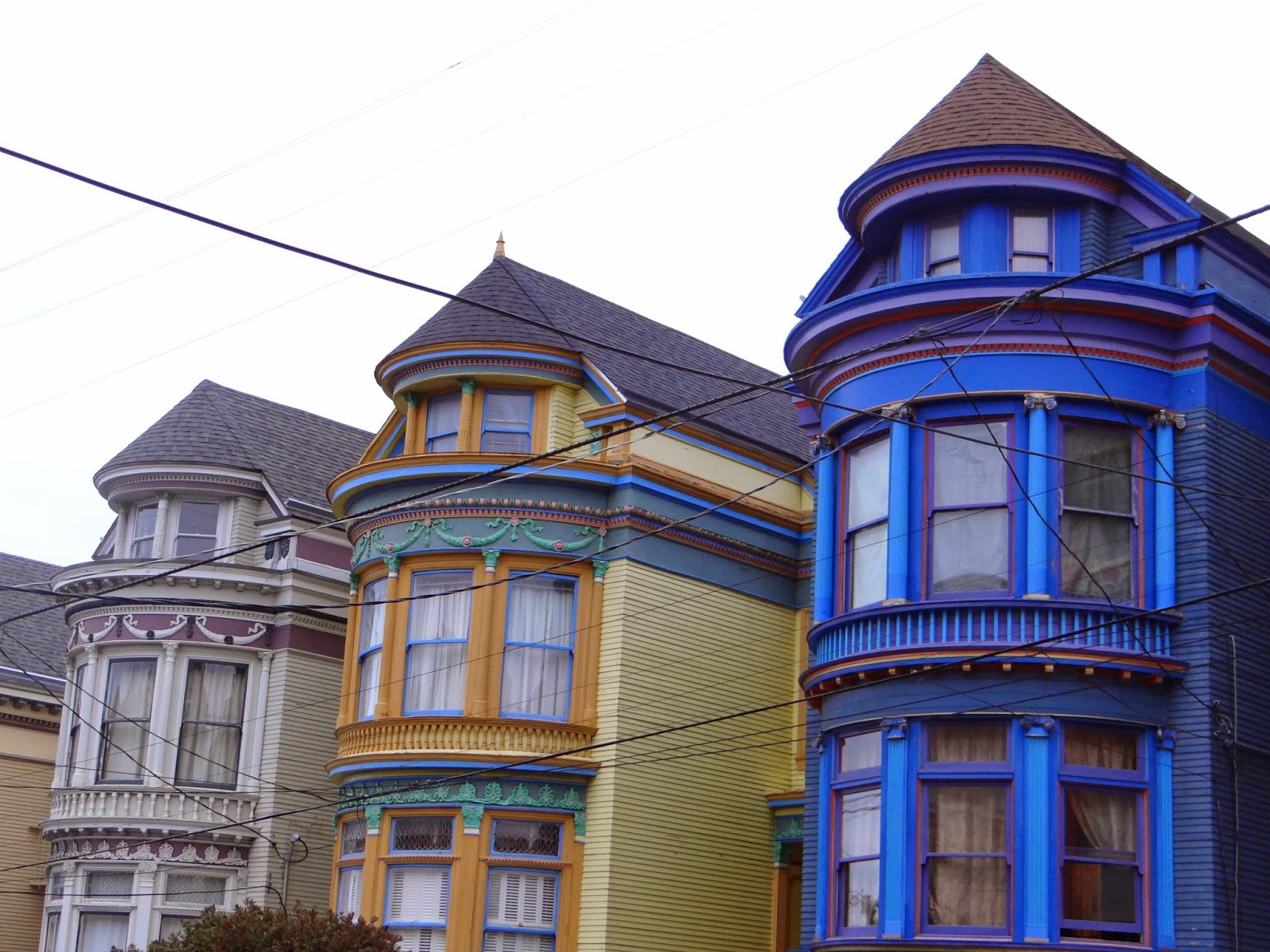 This past July I traveled to California.  California is a place I’ve always wanted to visit.  I had no trouble planning this trip as there were so many places I knew I wanted to go.   Due to high taxes on airfare in Canada, it is much cheaper for Canadians to cross the border and fly within America.  From Toronto there is a bus which goes directly to the Buffalo airport, with a one way ticket costing less than $20.  It is a pretty easy ride and they are very efficient at the border.  From Buffalo we flew to San Francisco with a layover in Minneapolis-St. Paul.  MSP has a lot of shopping in it, it’s definitely the kind of airport one would want to be stuck in for those ridiculously long layovers. 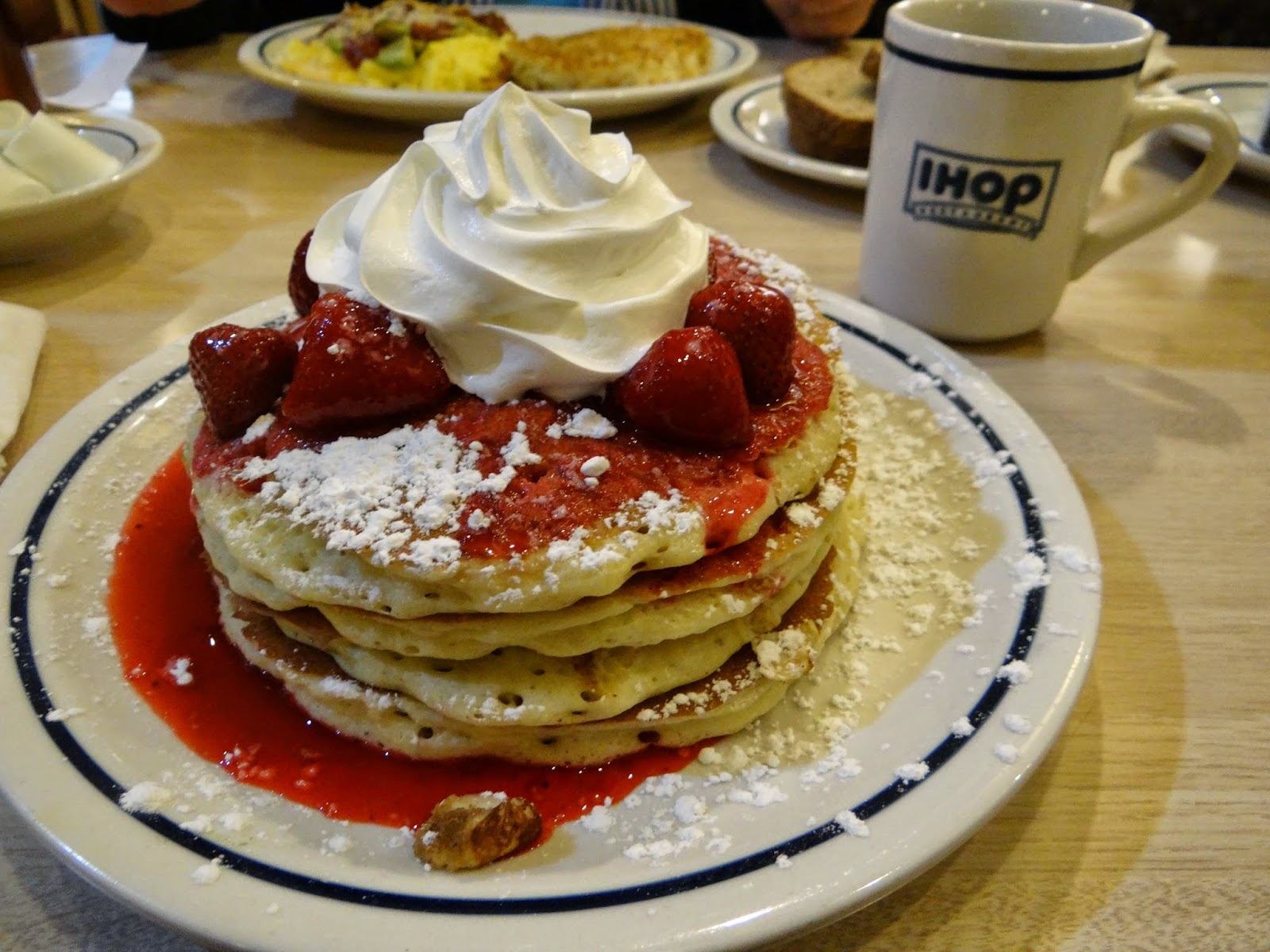 We landed in SFO in the middle of the night and collected our rental car from Hertz inside the airport.
We ended up with a Chevrolet Camaro, as we wanted a convertible…though not the most practical of cars for driving the hilly streets of San Francisco.  We went first to a 24hr iHop for breakfast…the food was not great and I was so tired I risked face planting in my New York Strawberry Cheesecake pancakes.  I had hoped we would have enough sleep on the plane to keep us going until we arrived at our accommodations that night.  However, as the sun wasn’t going to rise for another three hours we took a nap in the car.  For the record, the Camaro is also not a great car to sleep in.  The seats barely recline and it’s too small inside to stretch out.  In retrospect I wish I had booked a hotel and got a decent rest.

Around 6am, as the sun began to rise we made our way into the city.  I had printed all the directions off from Google maps.  There were some streets which Google maps sent us around in circles for and we
eventually resorted to the “Hertz Never Lost” system.  We were also restricted to listening to SiriusXM, which I have to listen to at work and grates on my nerves at this point.

Depending on your outlook San Francisco can be a very fun, or very stressful city to drive in.  Every travel website, blog and forum I consulted while planning advised not to drive in SF.  The streets are at nearly 90° angles, there are plenty of one ways and parking is sparse.  Since we needed a car for the rest of the trip though and it was convenient to pick it up at the airport, we drove anyway.  Driving through SF is a novel experience.  A street is literally patches of incredible angles, followed by a street light.  Everyone all at ones guns it up an incredible incline, only to have to break at a crossing street.  The incline is so steep you actually can’t see the other side of the road as you come up over the hill.  For a great depiction of driving in the city I recommend the iconic chase scene from Bullitt.

The first place we went was to see the Painted Ladies across the street from Alamo Square.  One of these was the Full House house. 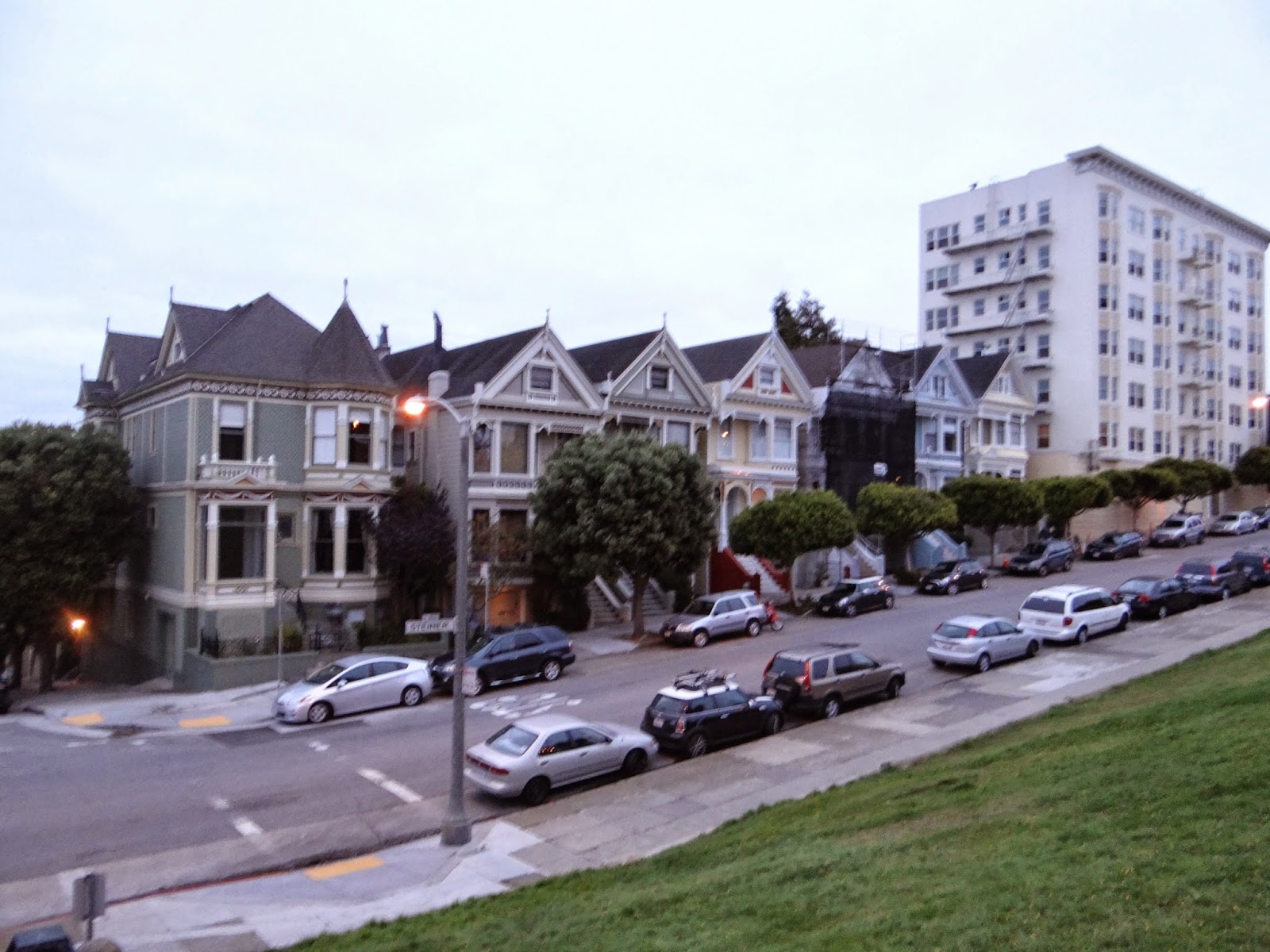 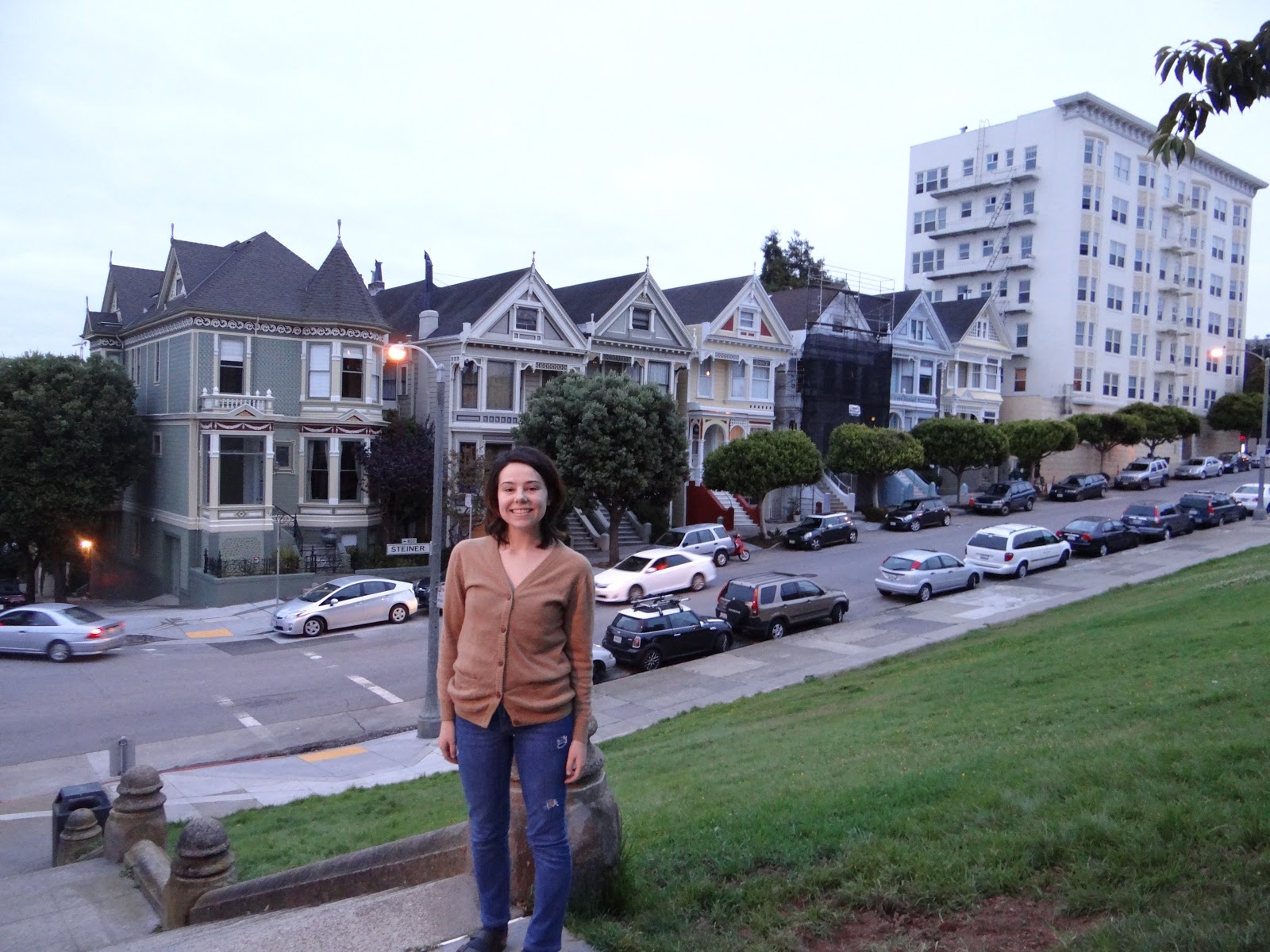 From there we went to the Haight-Ashbury district, named for the intersection of two streets.  In the late sixties Haight-Ashbury was the hub of the hippie revolution.  A great documentary about the area, with a wonderful sixties soundtrack is ‘Revolution’, it can be found on YouTube.  Here are some more painted ladies in The Haight, these are my favourite, I would love to live here one day.  It was still quite early at this point and there was little open, but I love walking around early in the morning before anyone else is up and around. 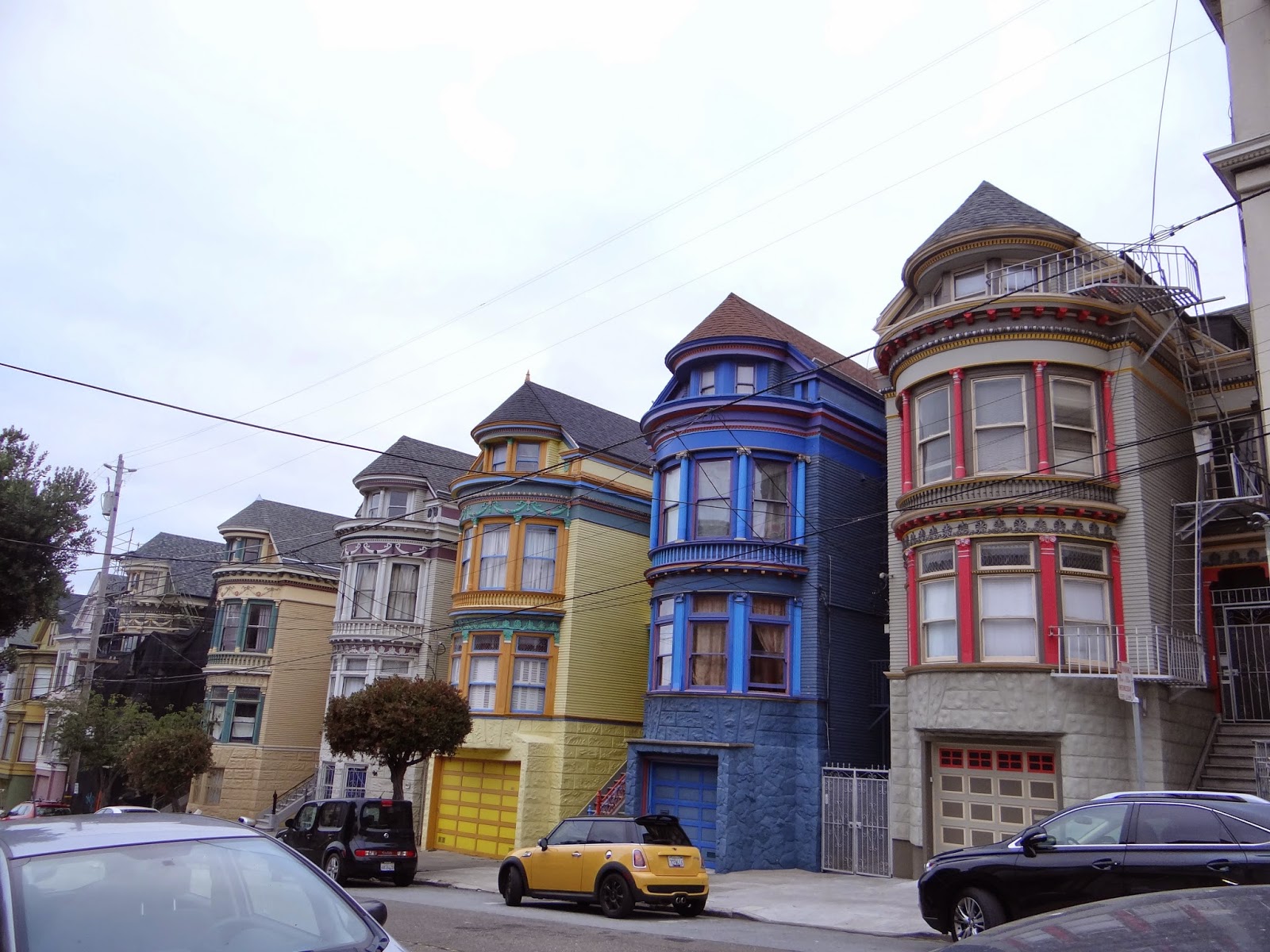 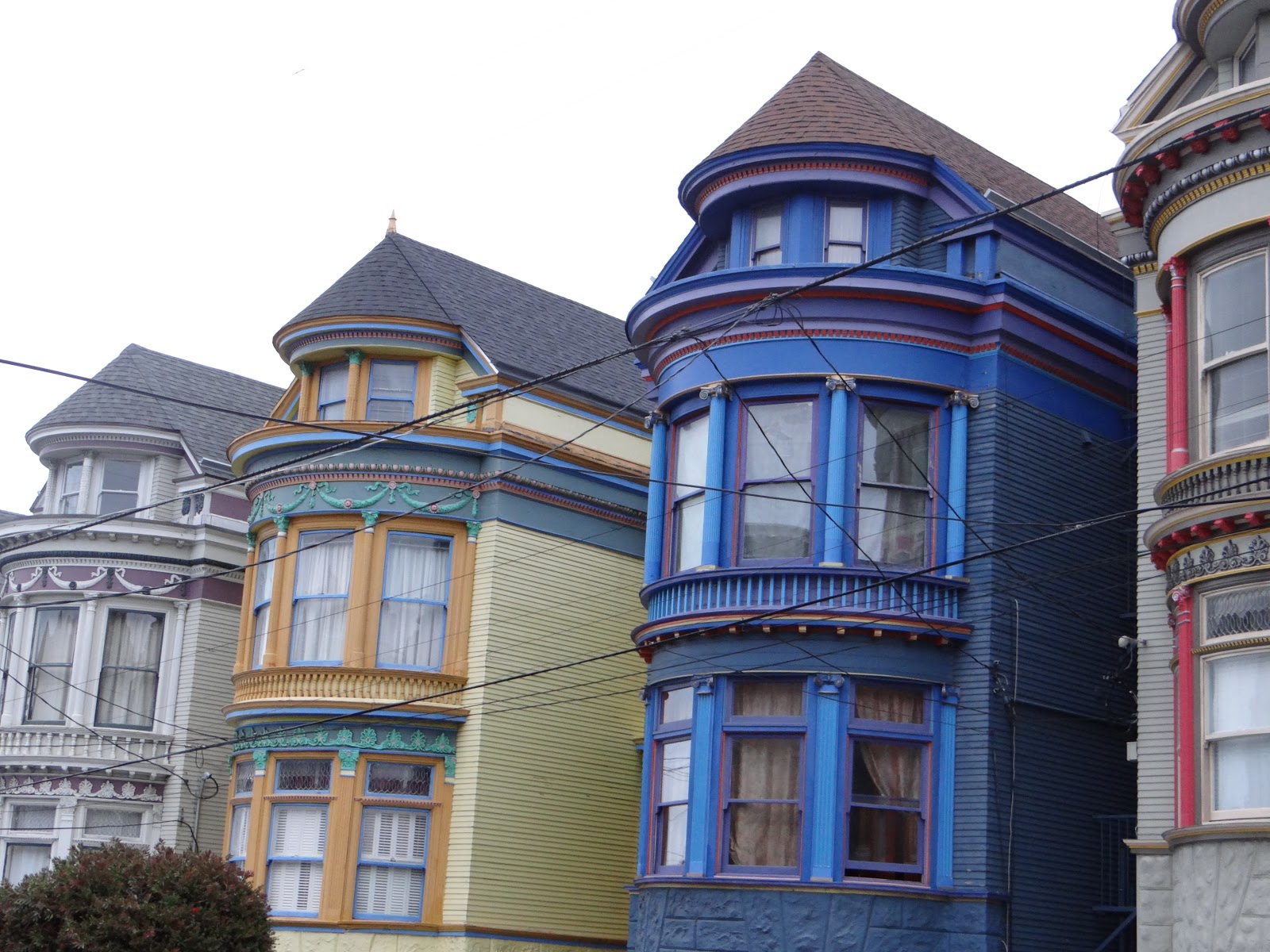 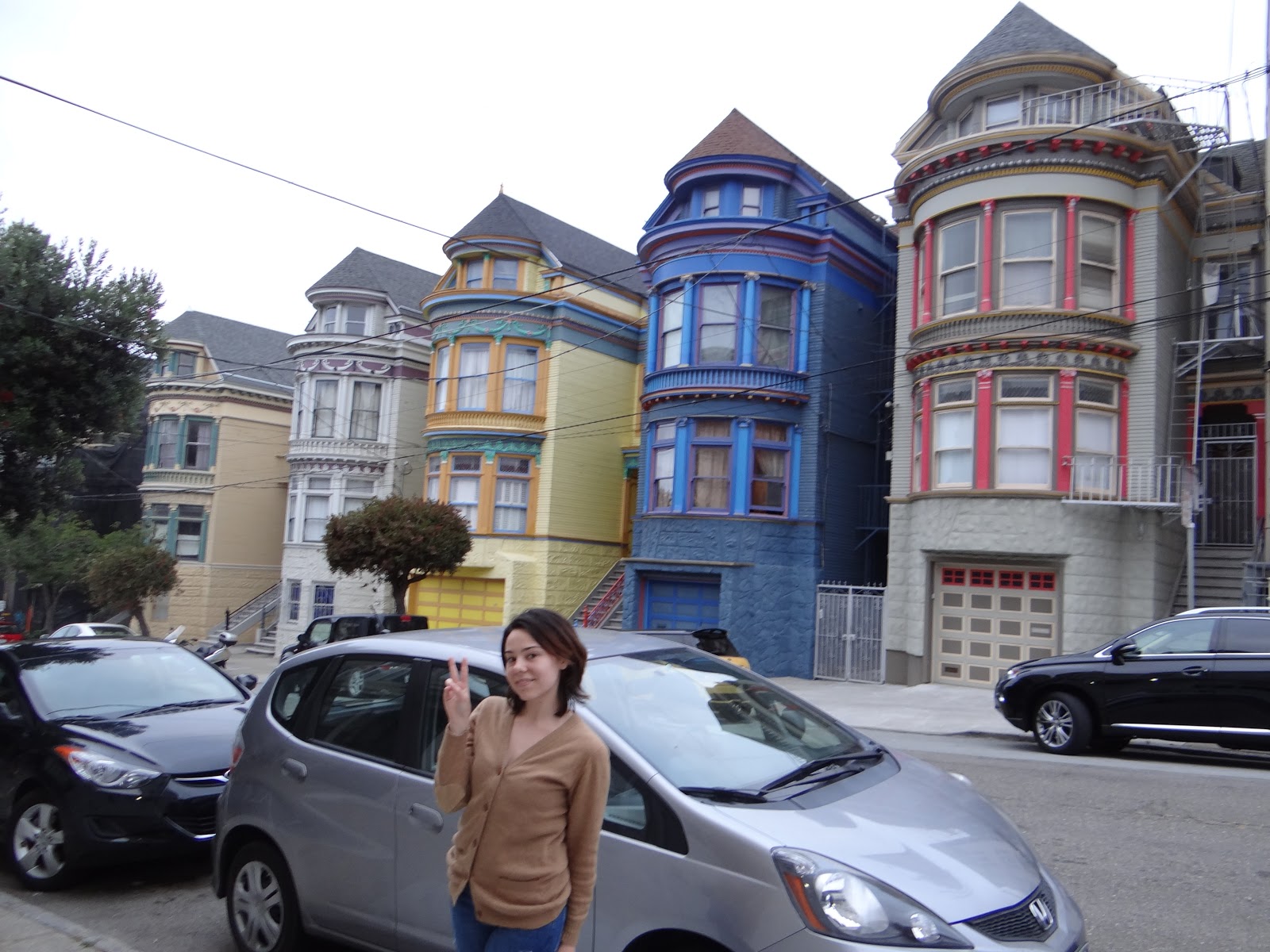 Here are some pictures depicting the angle of the streets.  Being one of those drivers who would sooner drive around the block an extra time than face the task of parallel parking, I can’t even begin to imagine the stress of having to park at 90°.  The laws about turning your wheels on an incline in parallel parking are strictly enforced there. 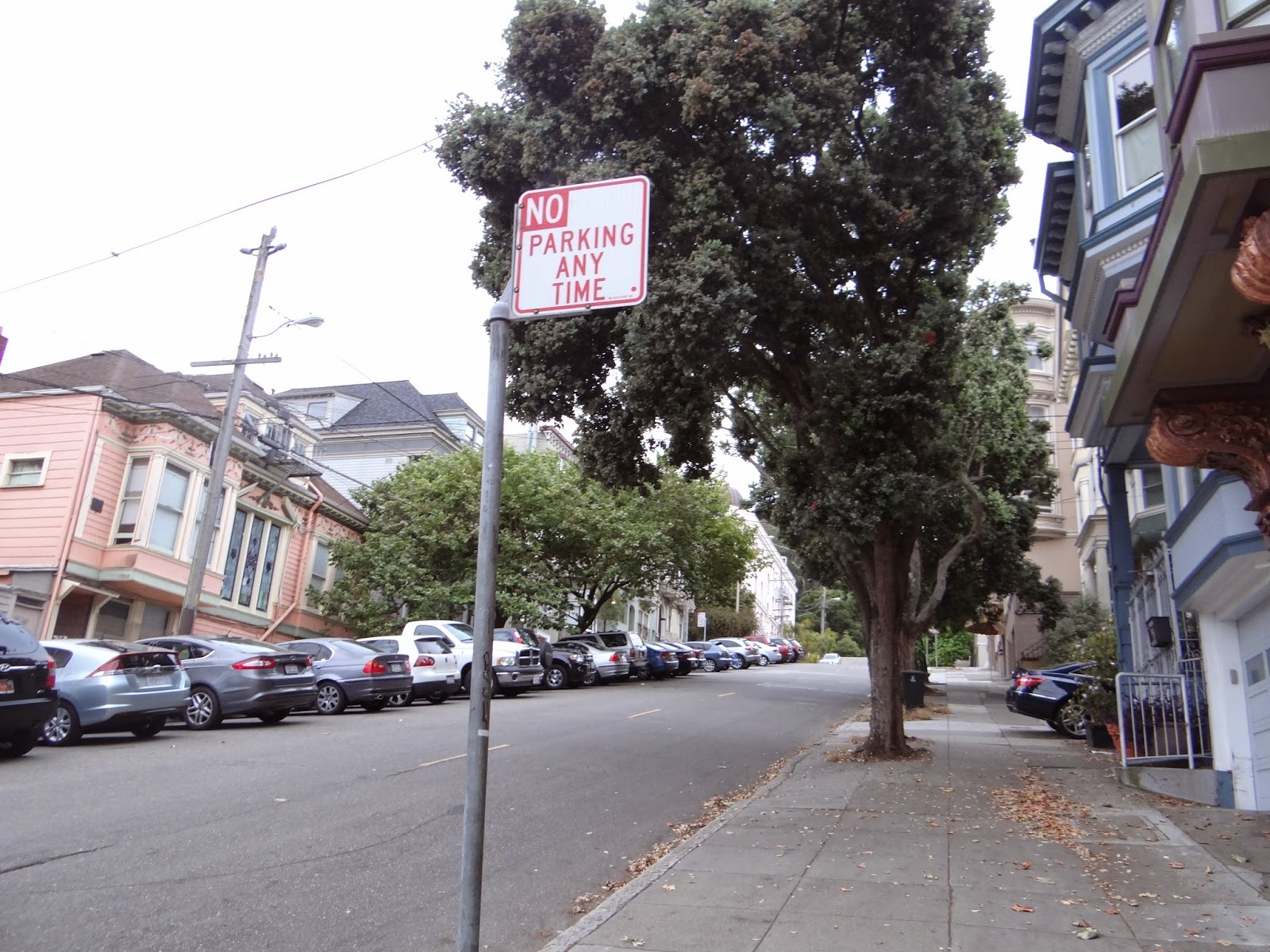 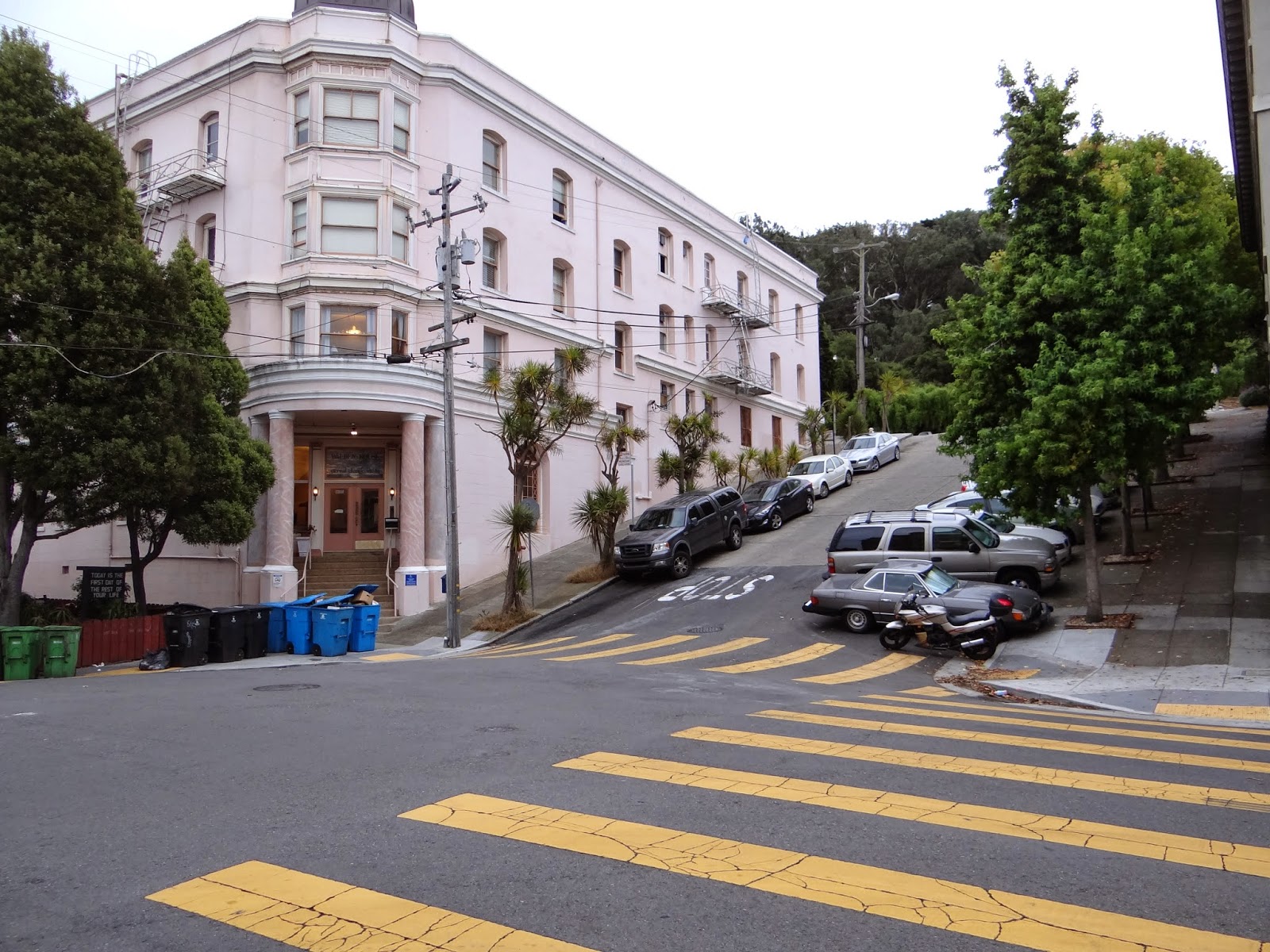 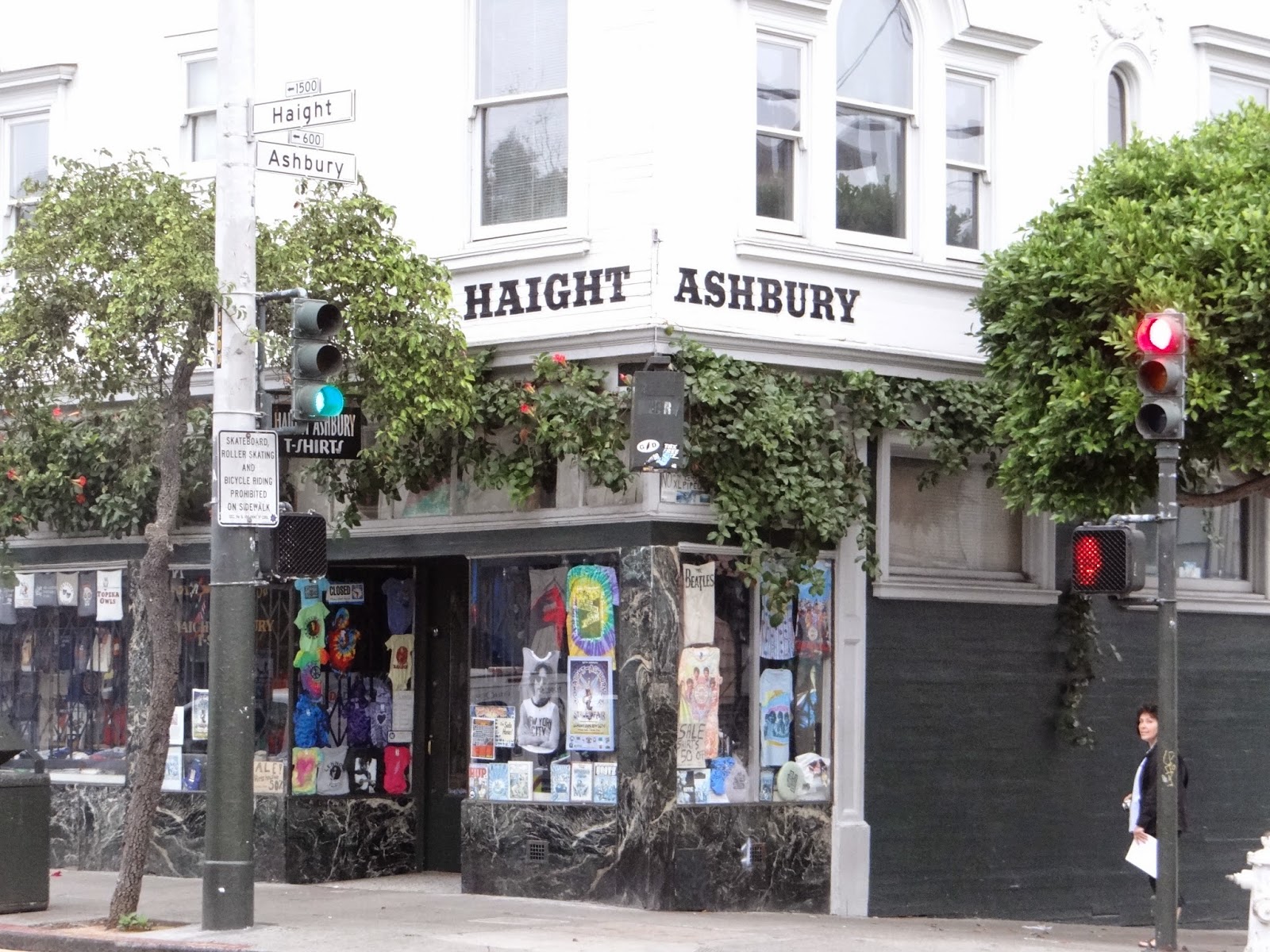 What is now the Magnolia Pub & Brewery was once the Drogstore Café.  This was a frequent hangout of the Haight-Ashbury 1960’s counter culture. 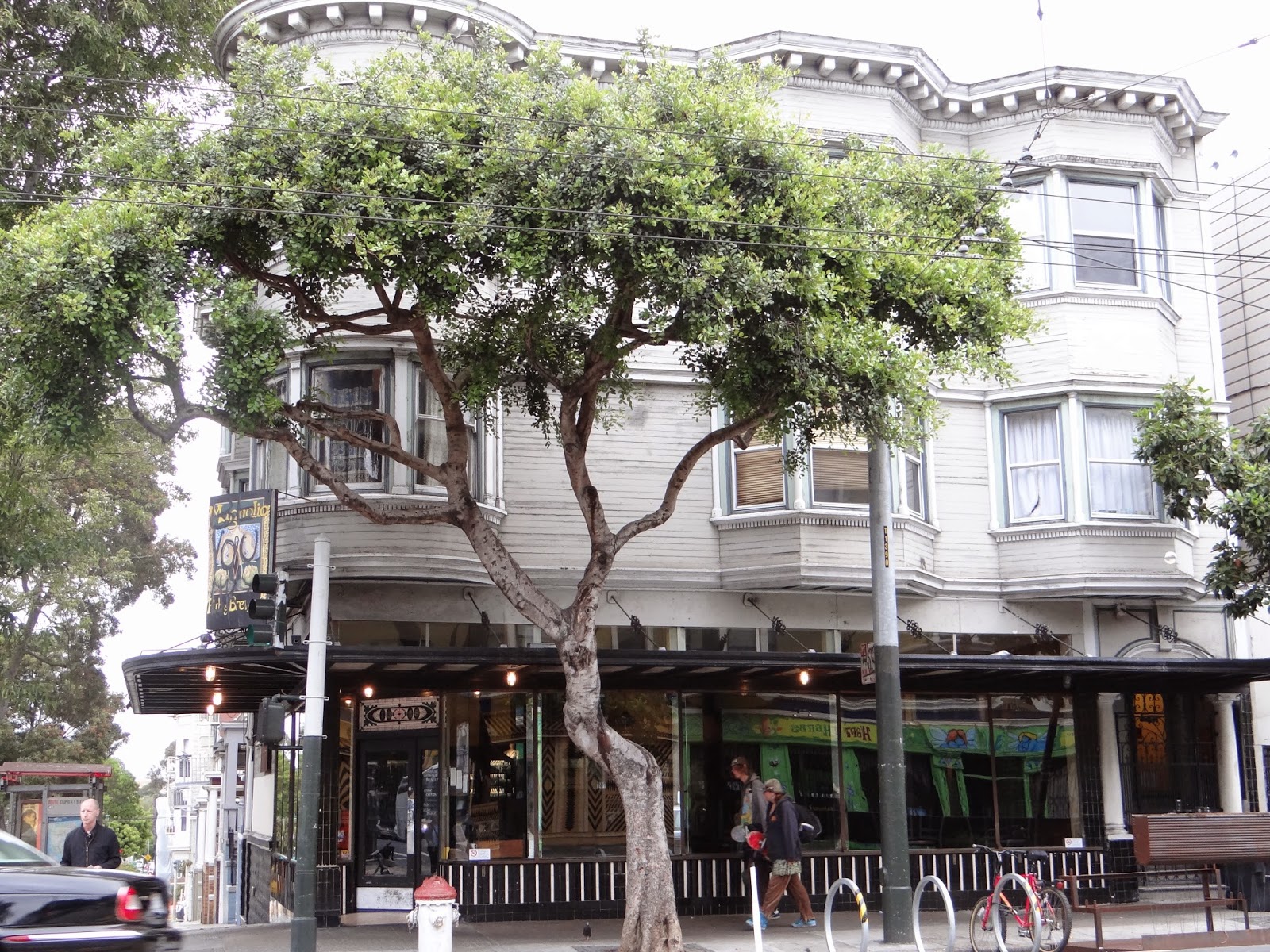 We ended up getting a parking ticket.  We thought we had such luck that we found some free parking early in the morning.  It was only available though as that side of the street was being swept.  The rest of the trip we spent a good deal of time reading all the signs as to avoid another.

After The Haight we drove out to see the Golden Gate Bridge.  The view from the city is much nicer and I hadn’t planned to go over the bridge, but I wasn’t in the leftmost lane and couldn’t exit in time to go to the look out.  It is a really quick drive over the bridge though.  Since it was so early in the morning and we were on the side with the less flattering view, there was almost no one there and free parking as well.  I’m glad we caught a time with heavy fog over the bridge. 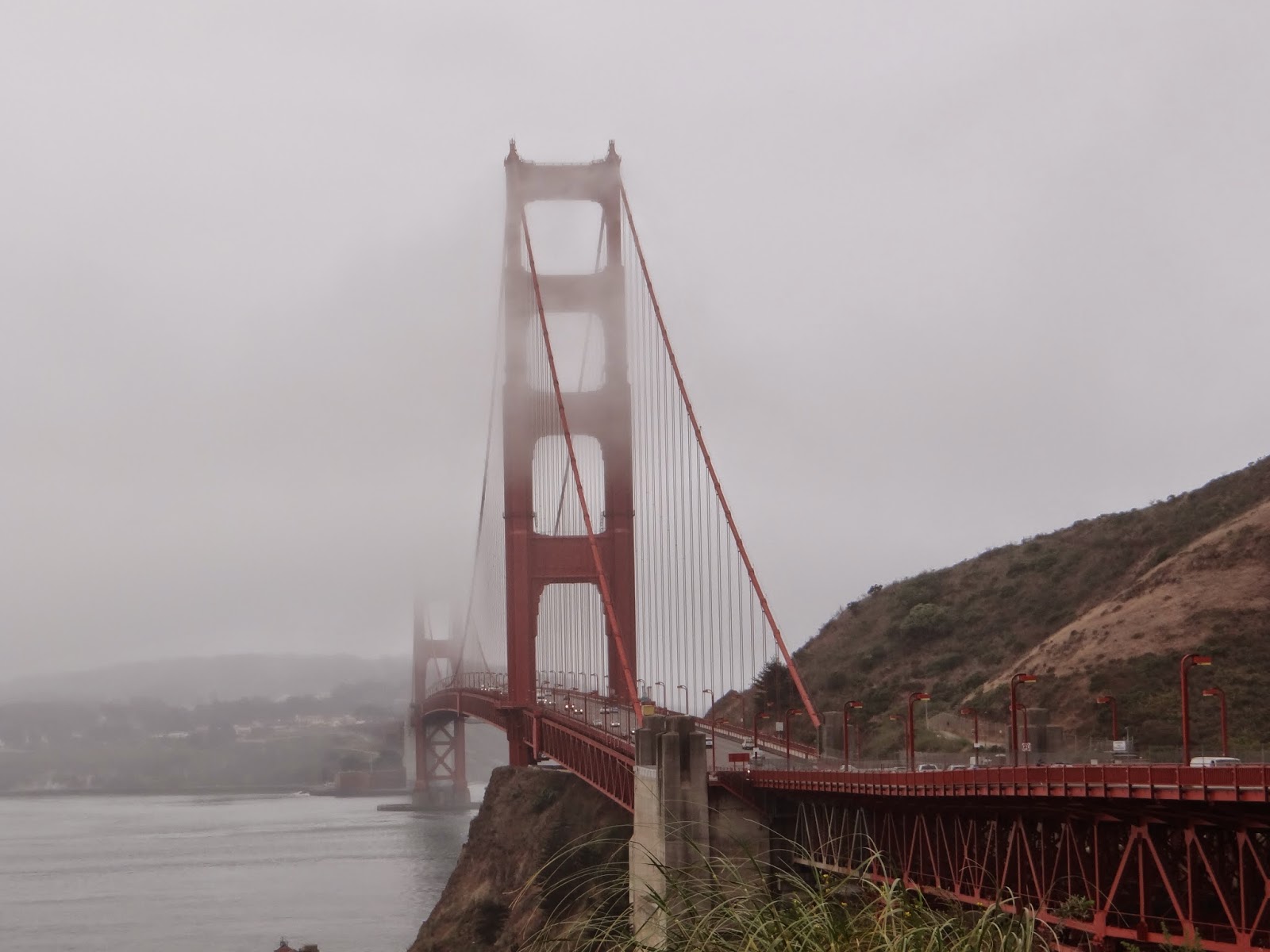 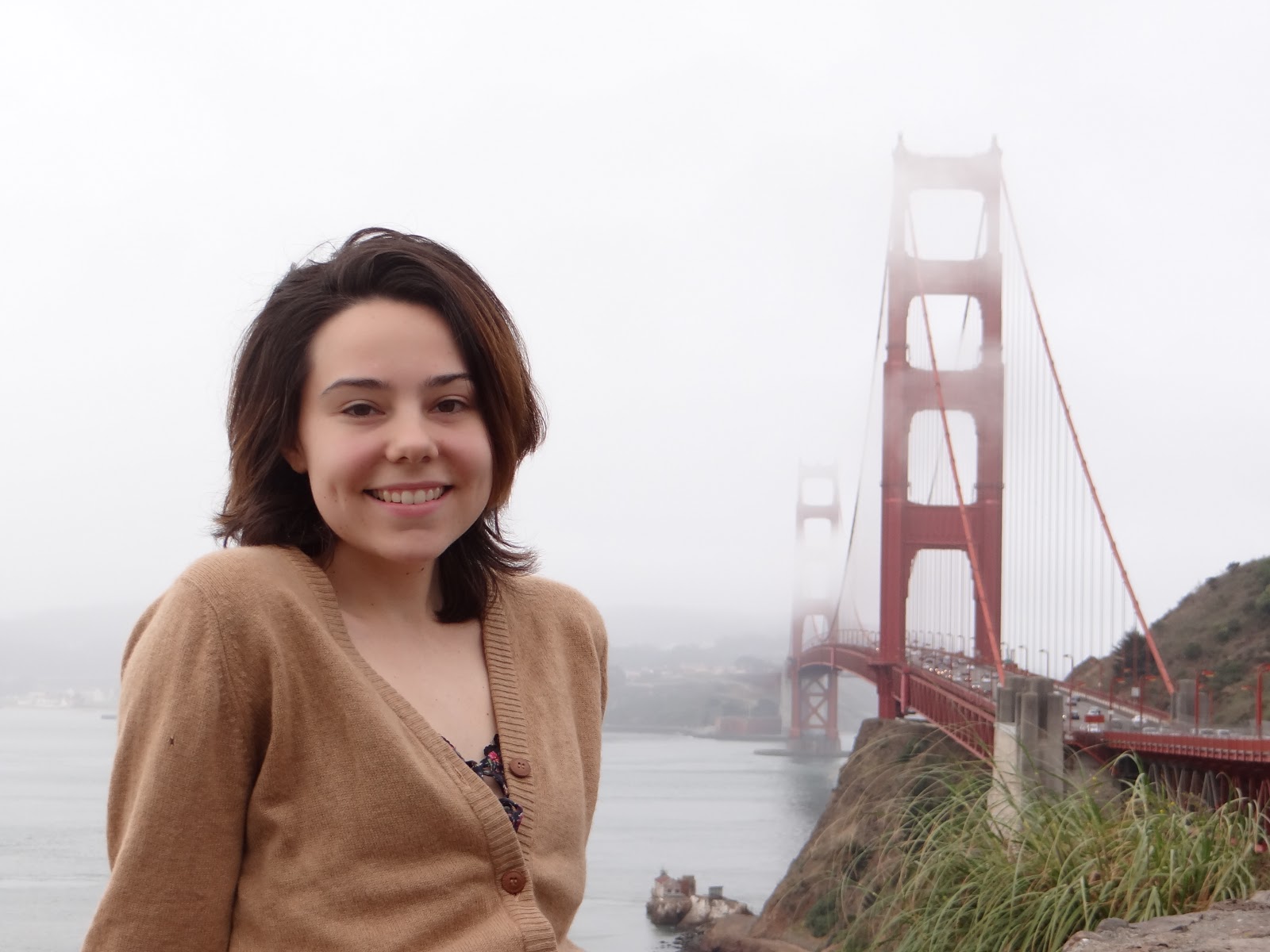 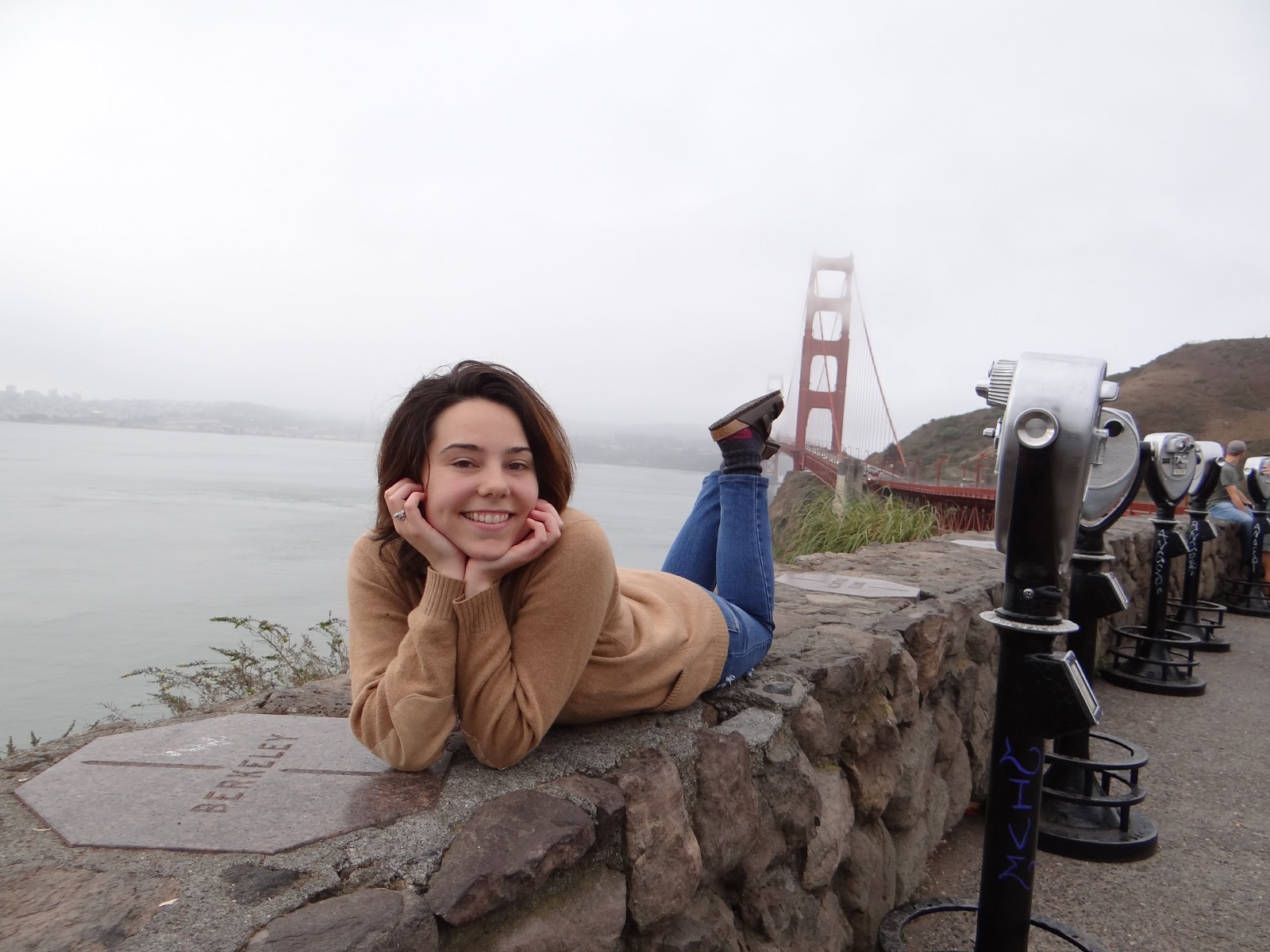 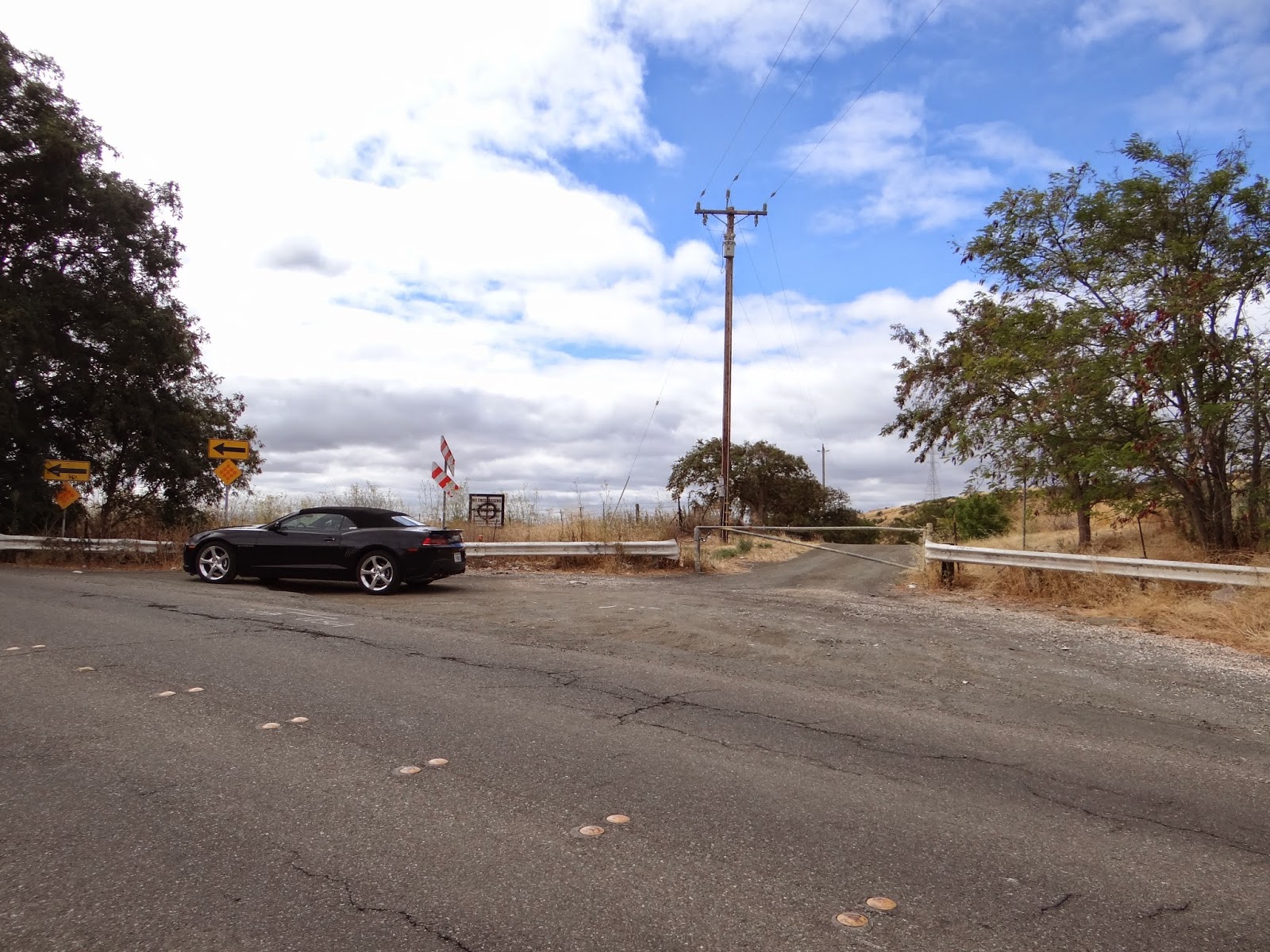 Our next stop was the spot in Benicia where the Zodiac shot Betty Lou Jensen and David Faraday.  I’m so intrigued by the Zodiac and how he managed to communicate and taunt the Bay Area residents without being caught.  His story is a very interesting footnote in forensic history, there were so many times where he could have been caught, but something went wrong.  It’s a very interesting story to look into if you’re not already familiar with it.  My favourite classes in my psychology degree were Forensics and Abnormal Psychology.  I read the book Zodiac written by Robert Graysmith last spring.  Though it has been cirticized for being biased, it is very well written and was the basis for a great movie of the same title.  This spot is on Lake Herman road, very much out of the way.  It is a beautiful area though, with all the rolling hills.  I don’t have a picture, though we also went to Blue Rock Springs Park in Vallejo, where the Zodiac attacked Darlene Ferrin and Michael Mageau. 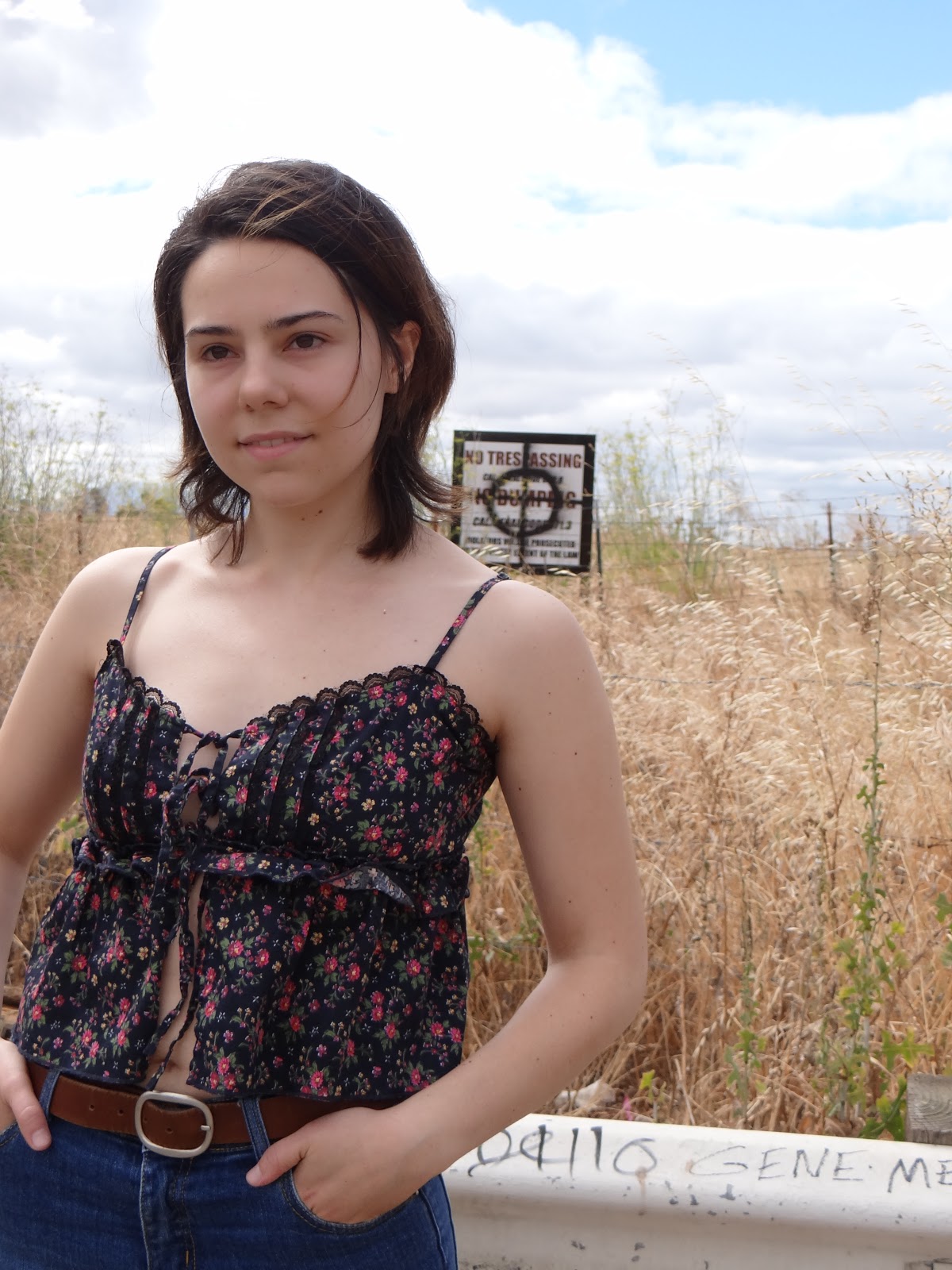 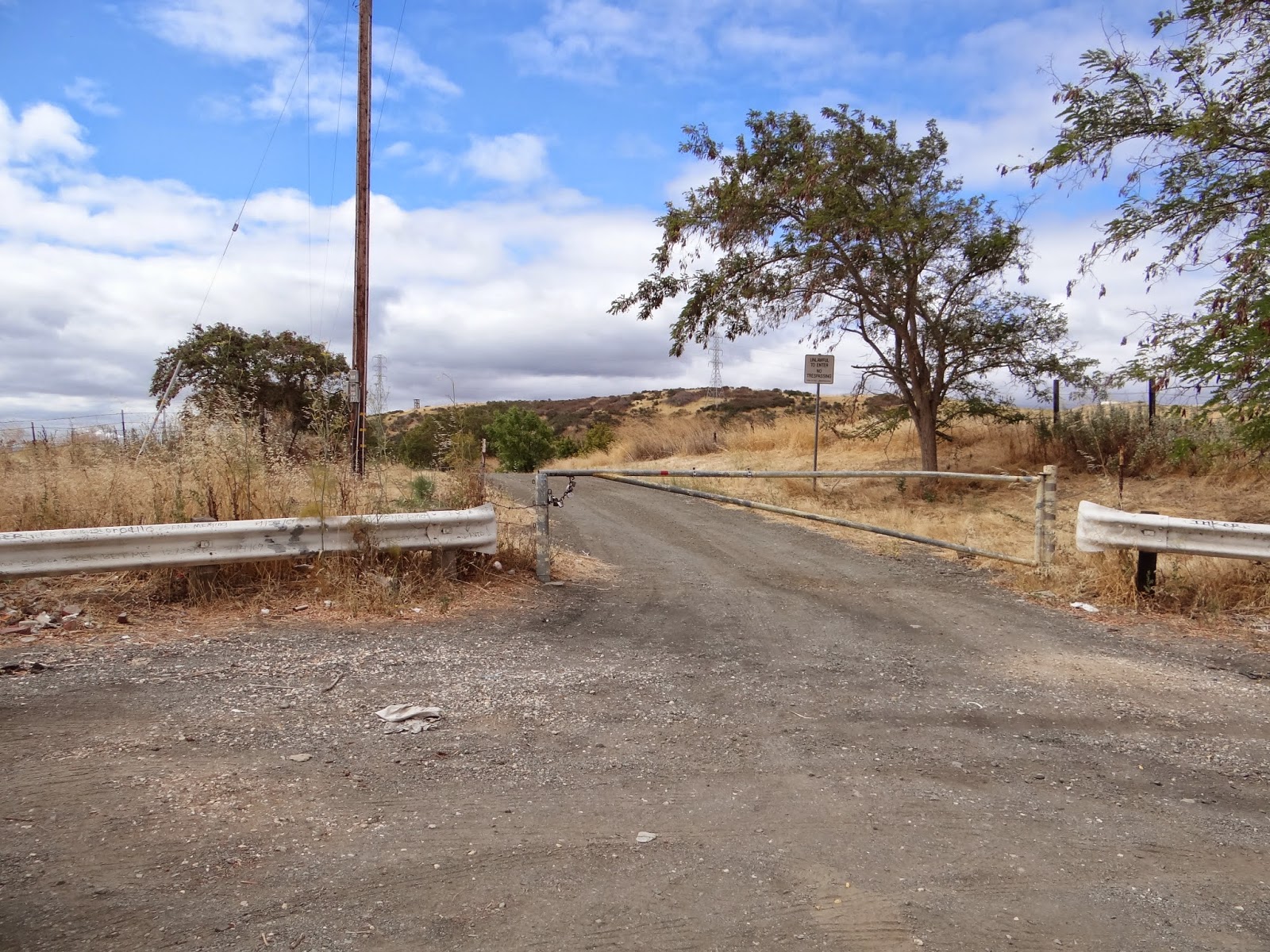 The spray painted symbol is that with which the Zodiac signed the letters which he sent the police and local news papers.  He also claimed he wanted buttons made up containing the symbol. 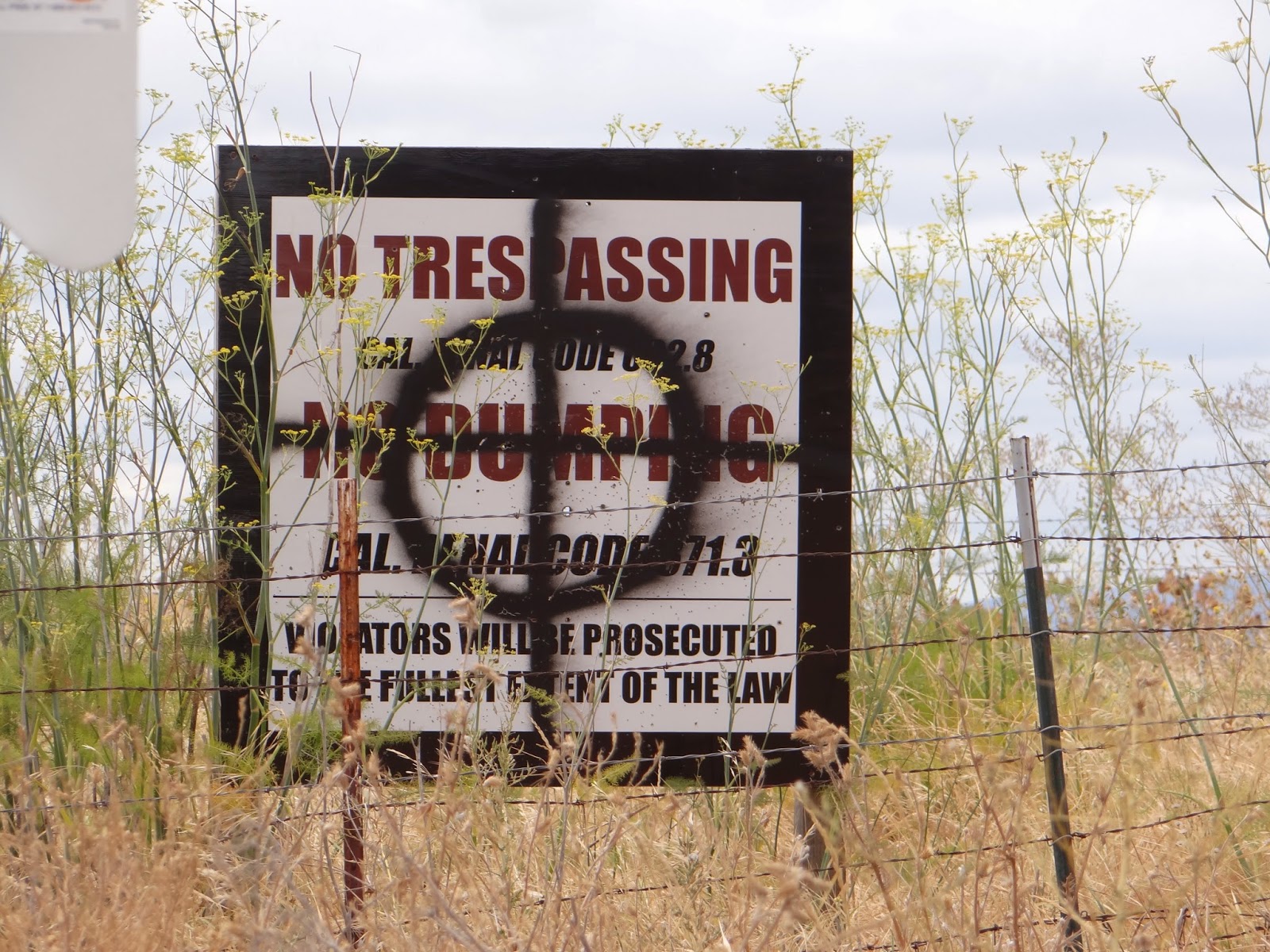 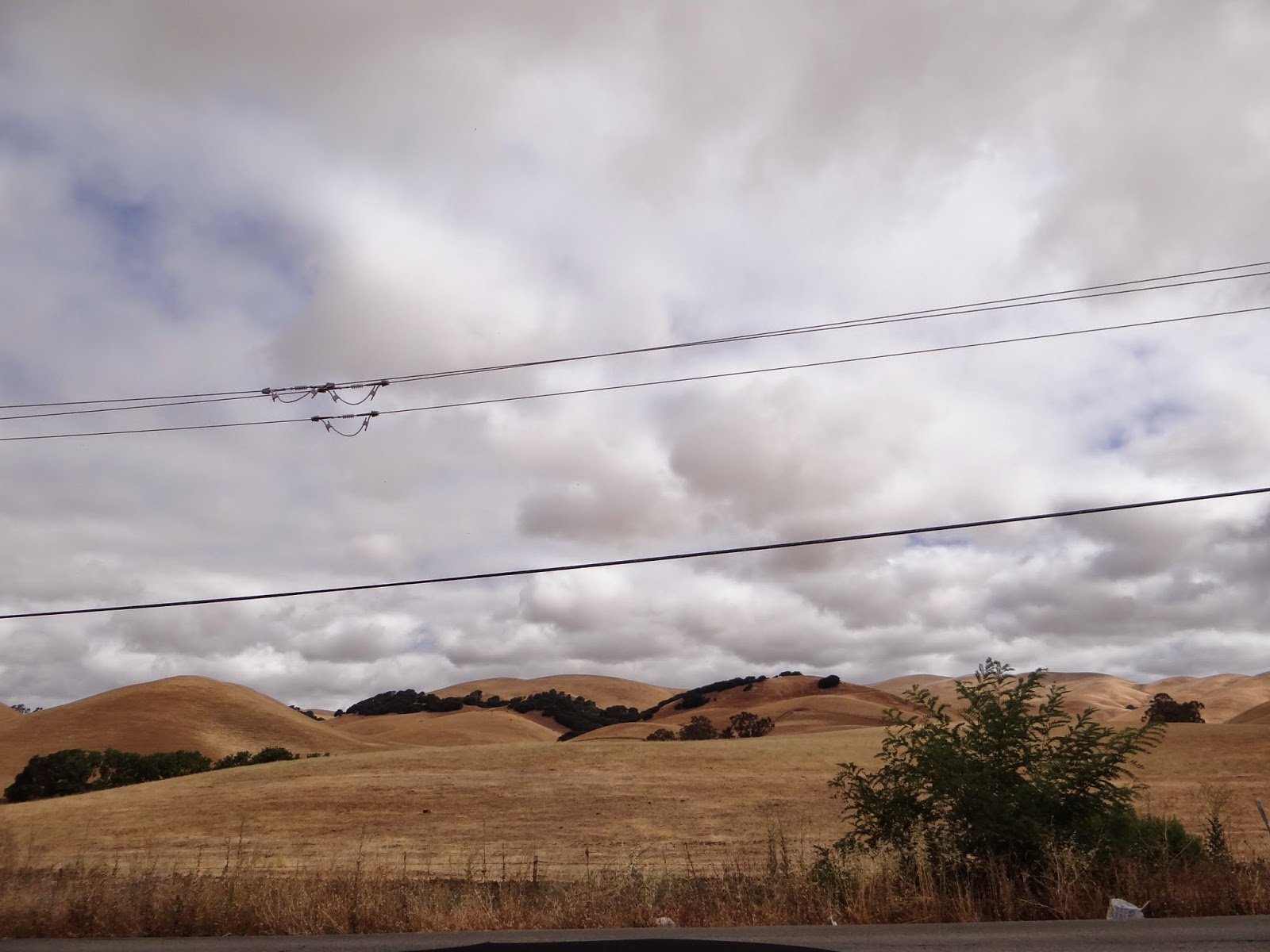 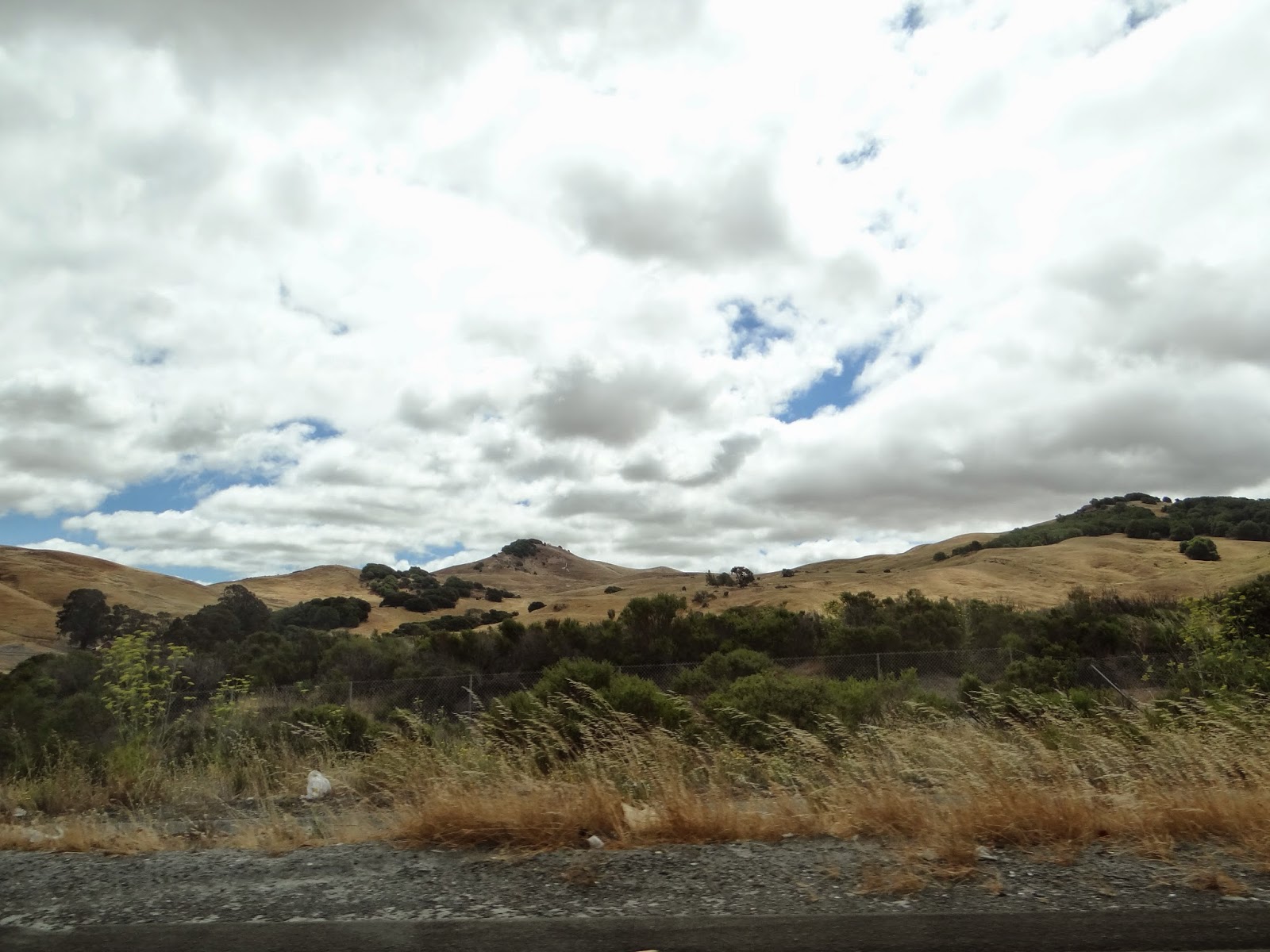 Following this we had lunch at In-N-Out Burger.  I had been very excited to try it, from all the praise it gets.  It wasn’t terribly memorable though, except for the fries which deflate in your mouth (not a fond memory).  I ordered the animal style fries, with caramelized onions, cheese and what appeared to be thousand-island dressing.  The actual toppings would have been great if the fries were any good. 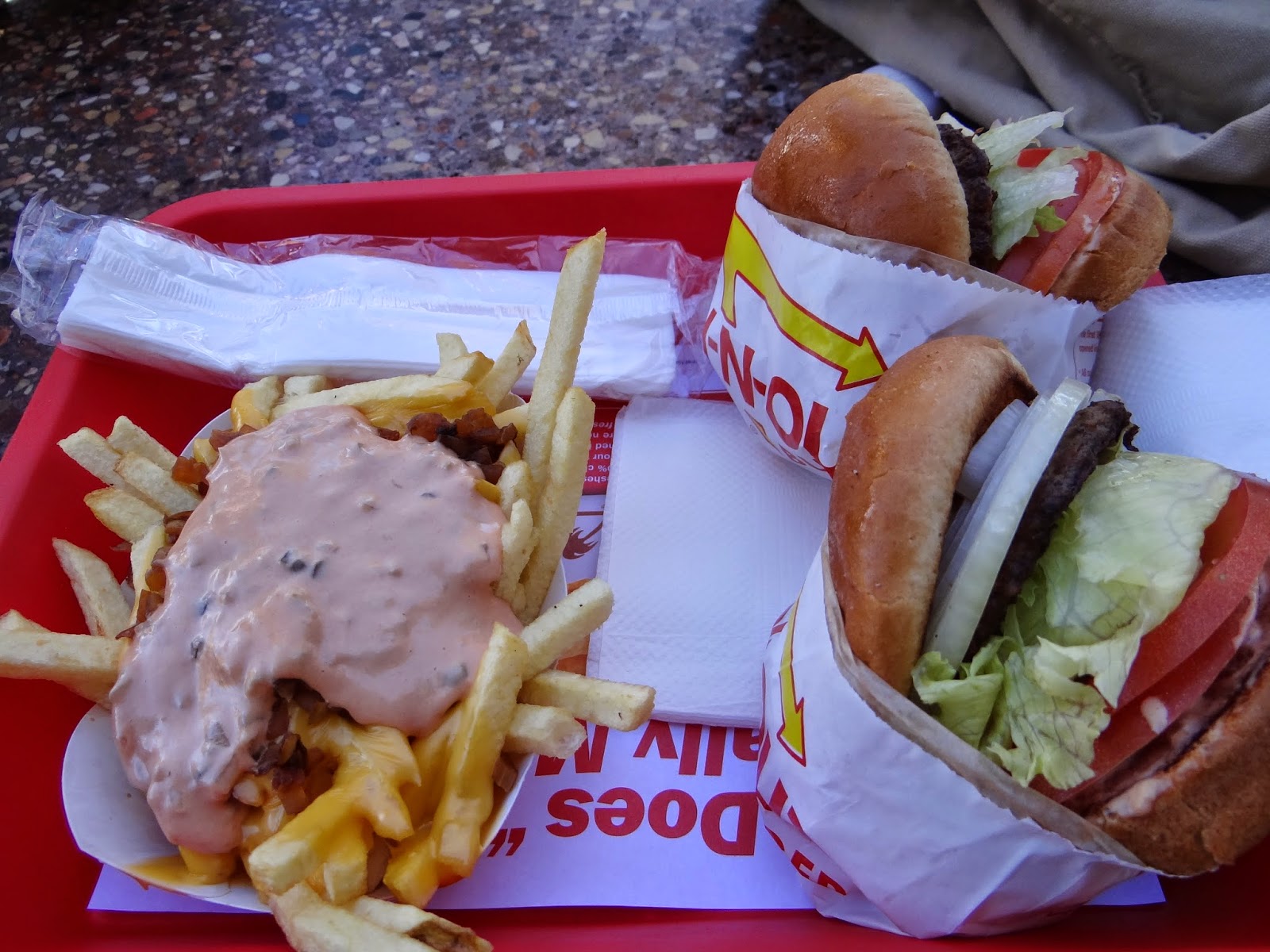 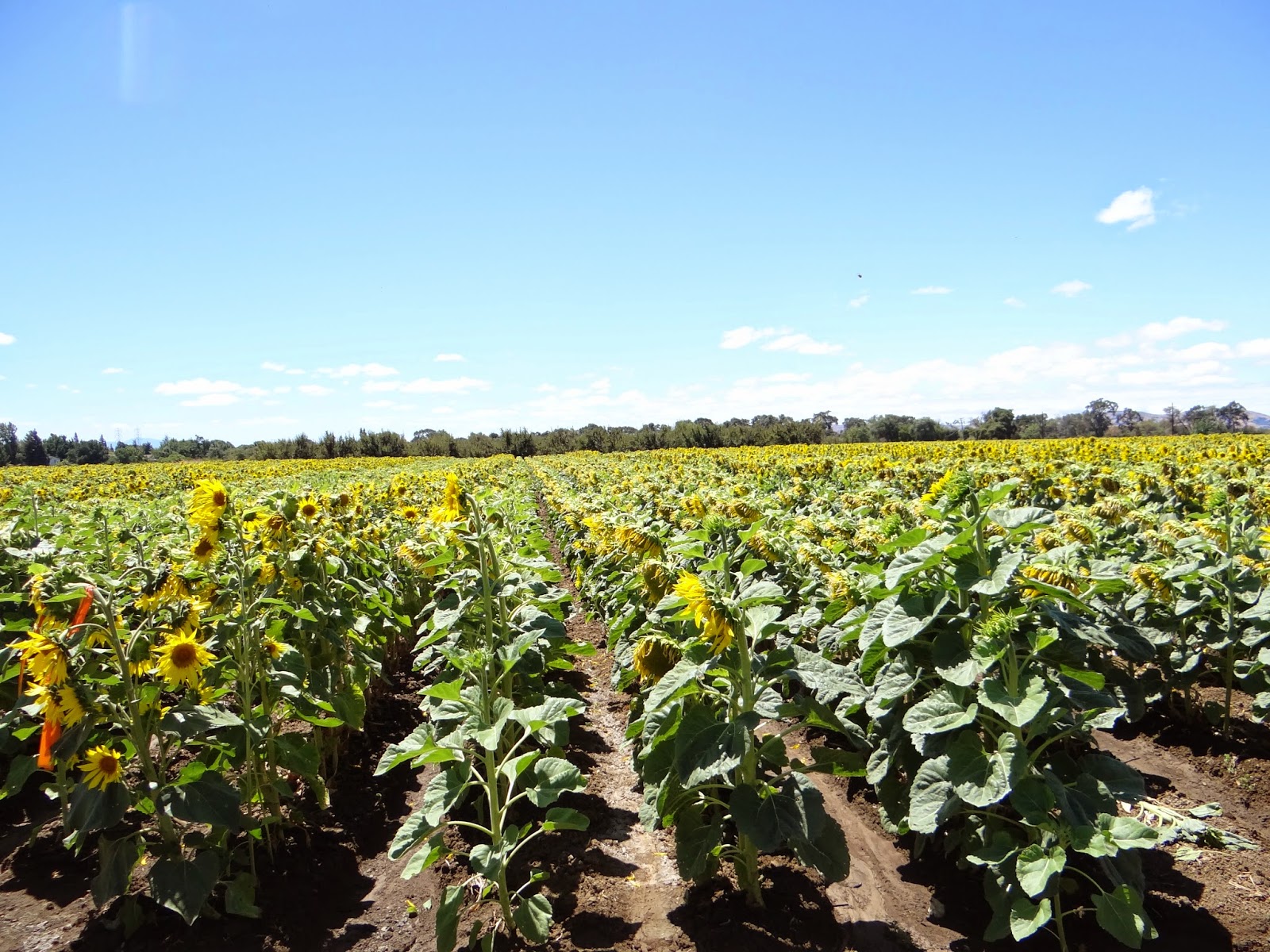 We drove up through Napa, a beautiful picturesque drive up to Lake Berryessa.  I’m not much into wine, but I could definitely see the appeal of a relaxing getaway in Northern California’s wine country.  We also happened upon this gorgeous field of sunflowers. 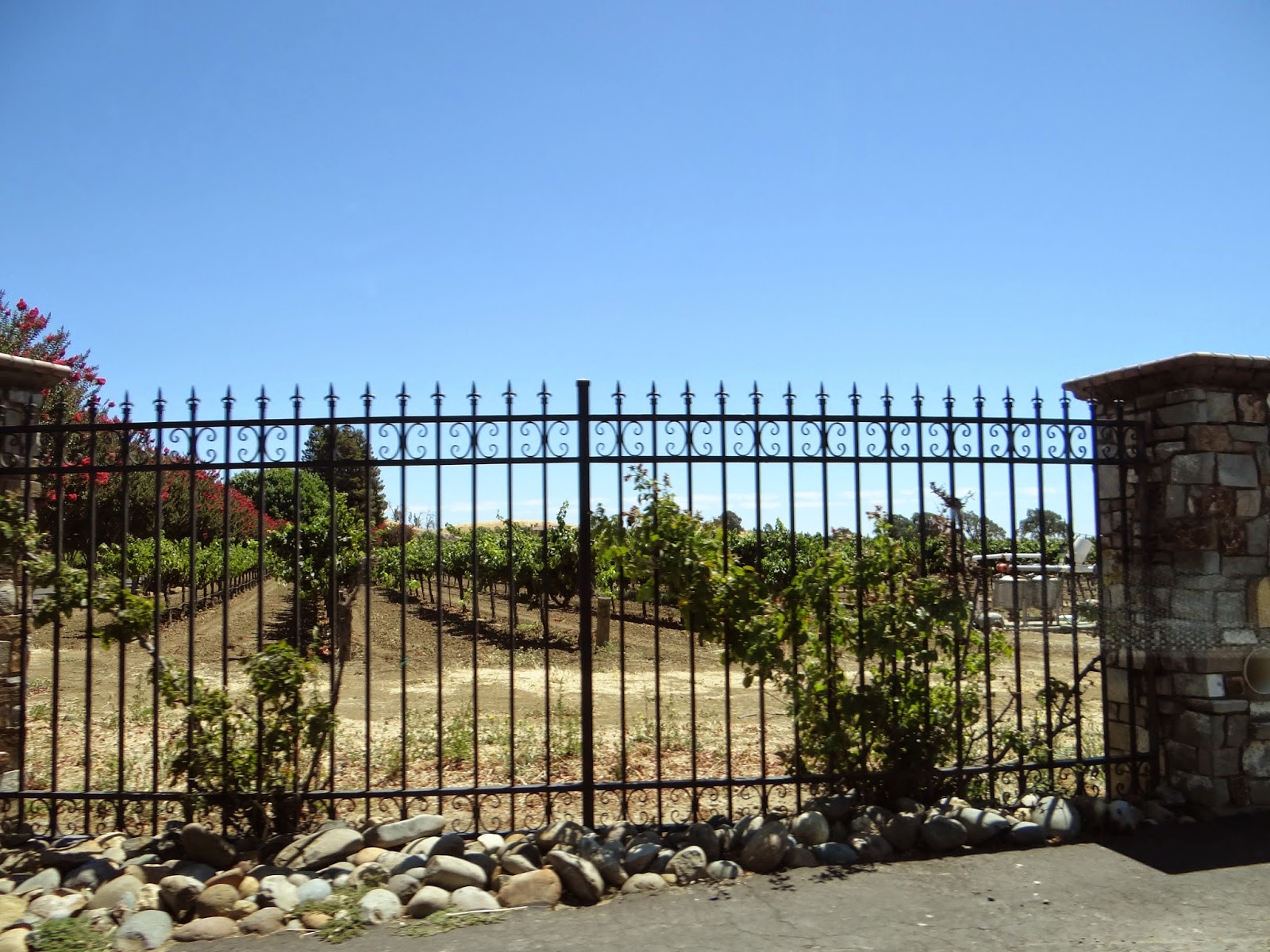 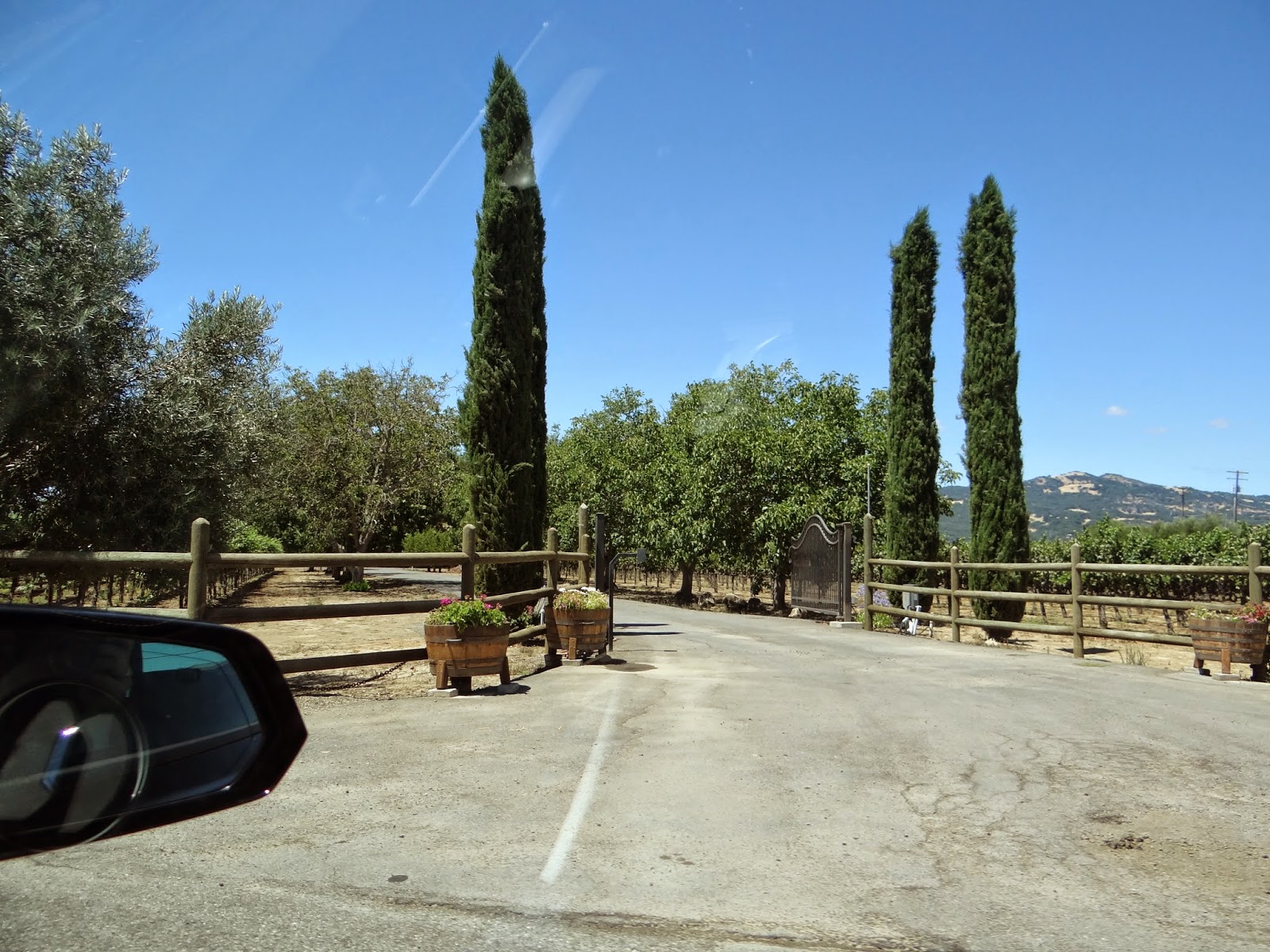 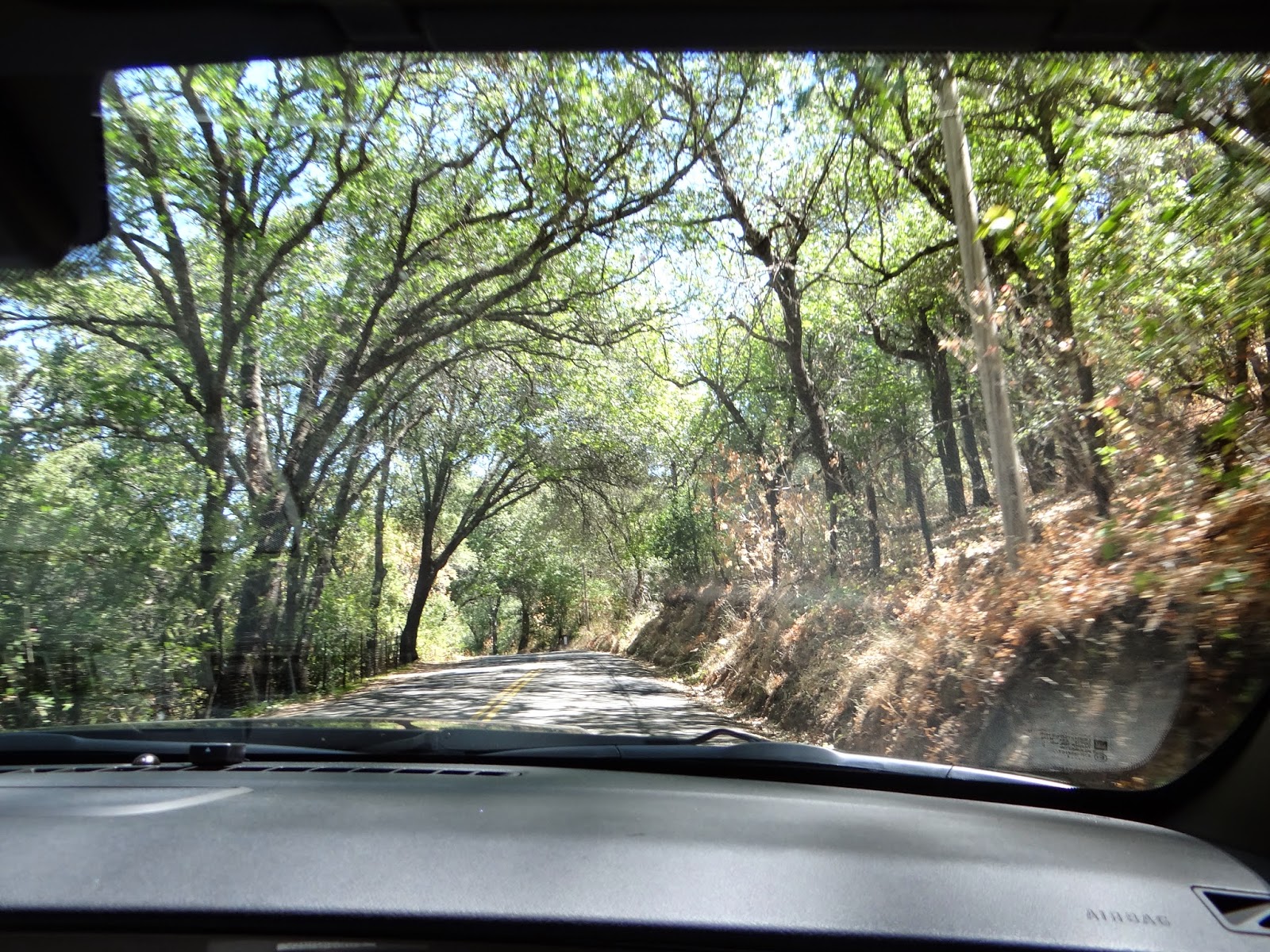 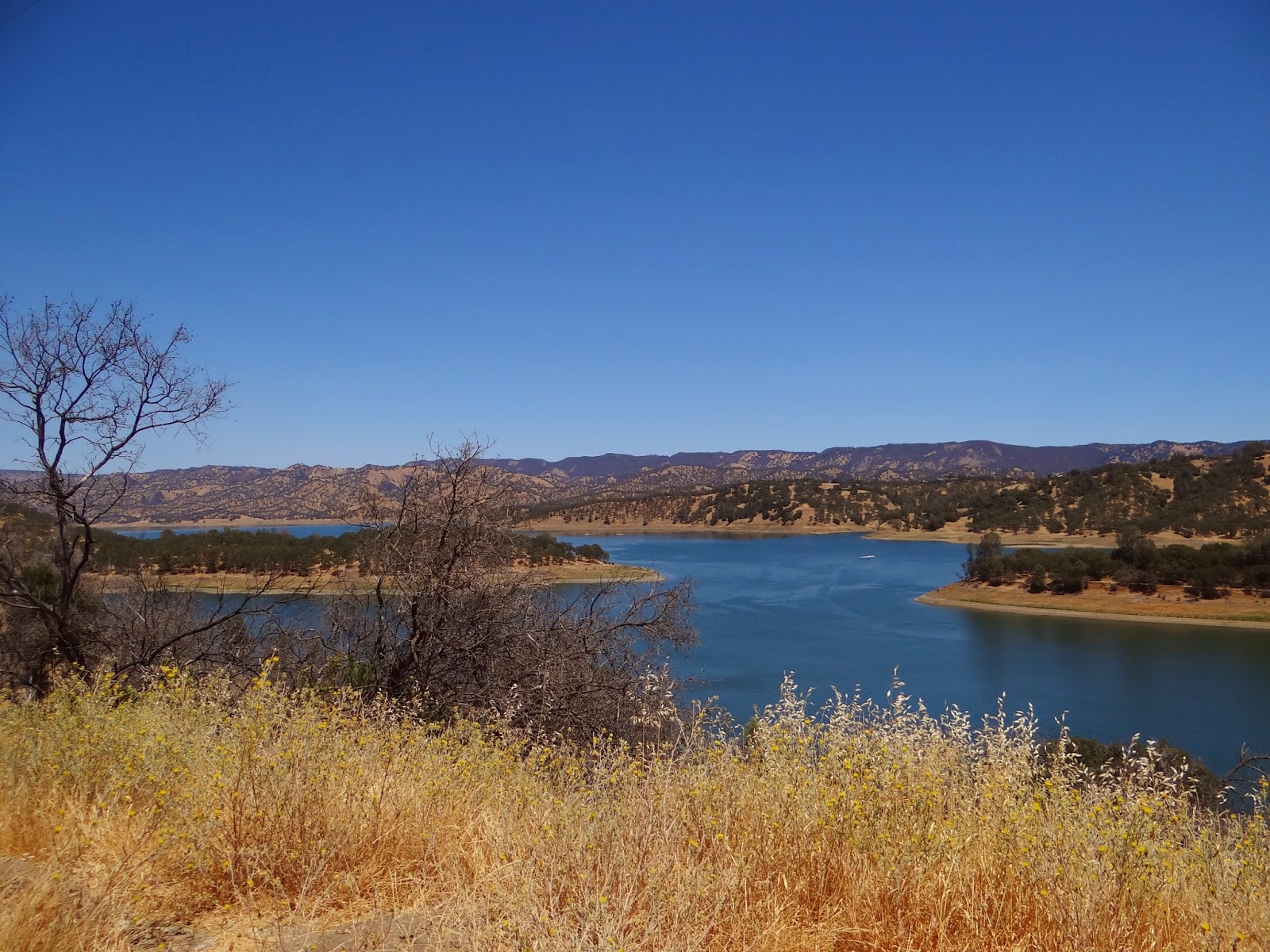 Scenic Lake Berryessa is where The Zodiac stabbed Bryan Hartnell and Cecilia Shepard.  It is hard to imagine how the Zodiac accomplished this in the middle of the day.  There is nothing ominous about the lake, it is open and anyone else could have come by.  Not to mention the distance the Zodiac had to travel to meet the couple.  Aside from the events which occurred there, the spot is stunning.  Due to the surrounding of rolling hills the acoustics are all absorbed.  Even with other people around you feel as though you have the place to yourself.  The vibrant colours are also stunning, it would be a lovely place to spend a summer day. 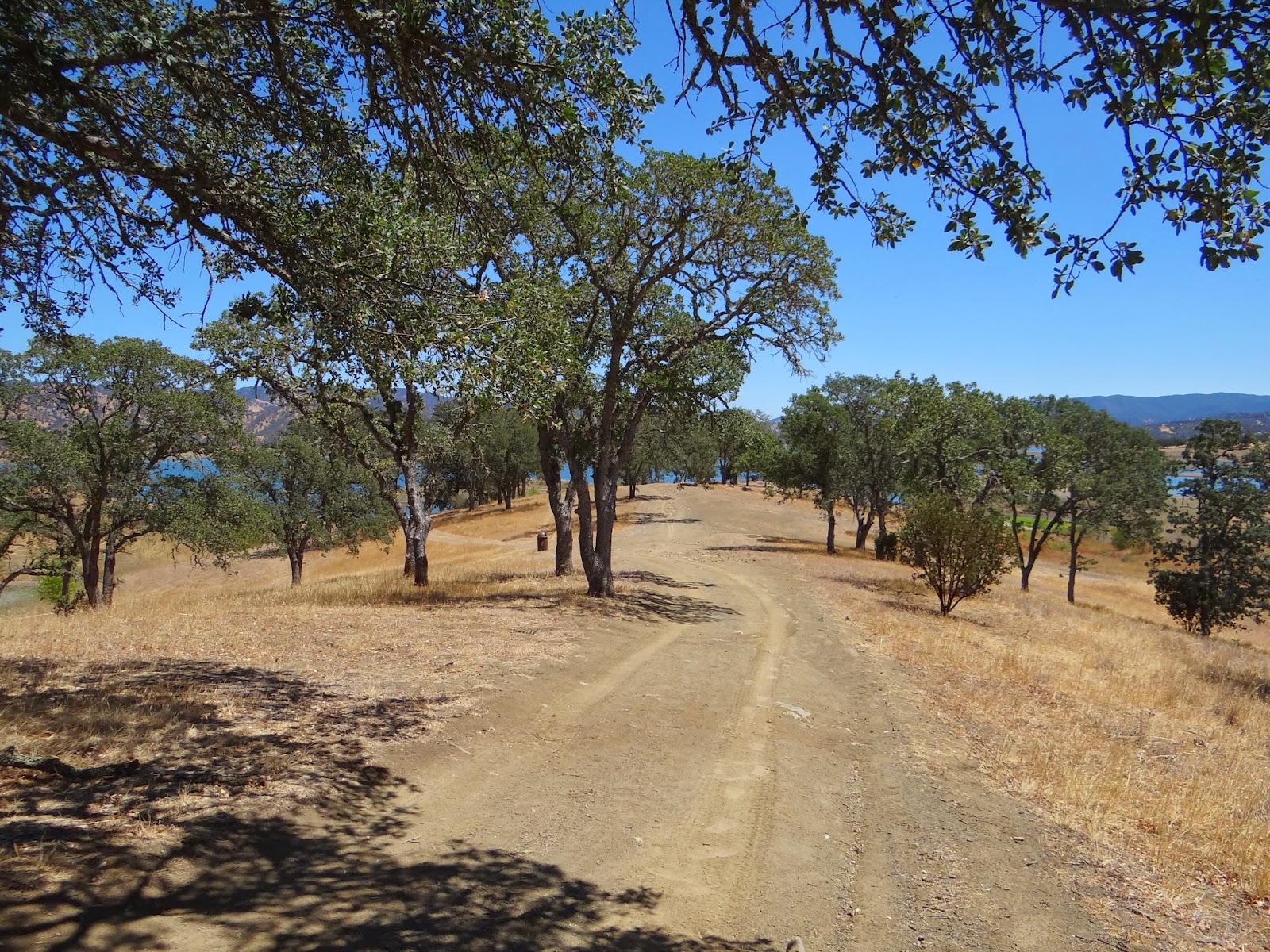 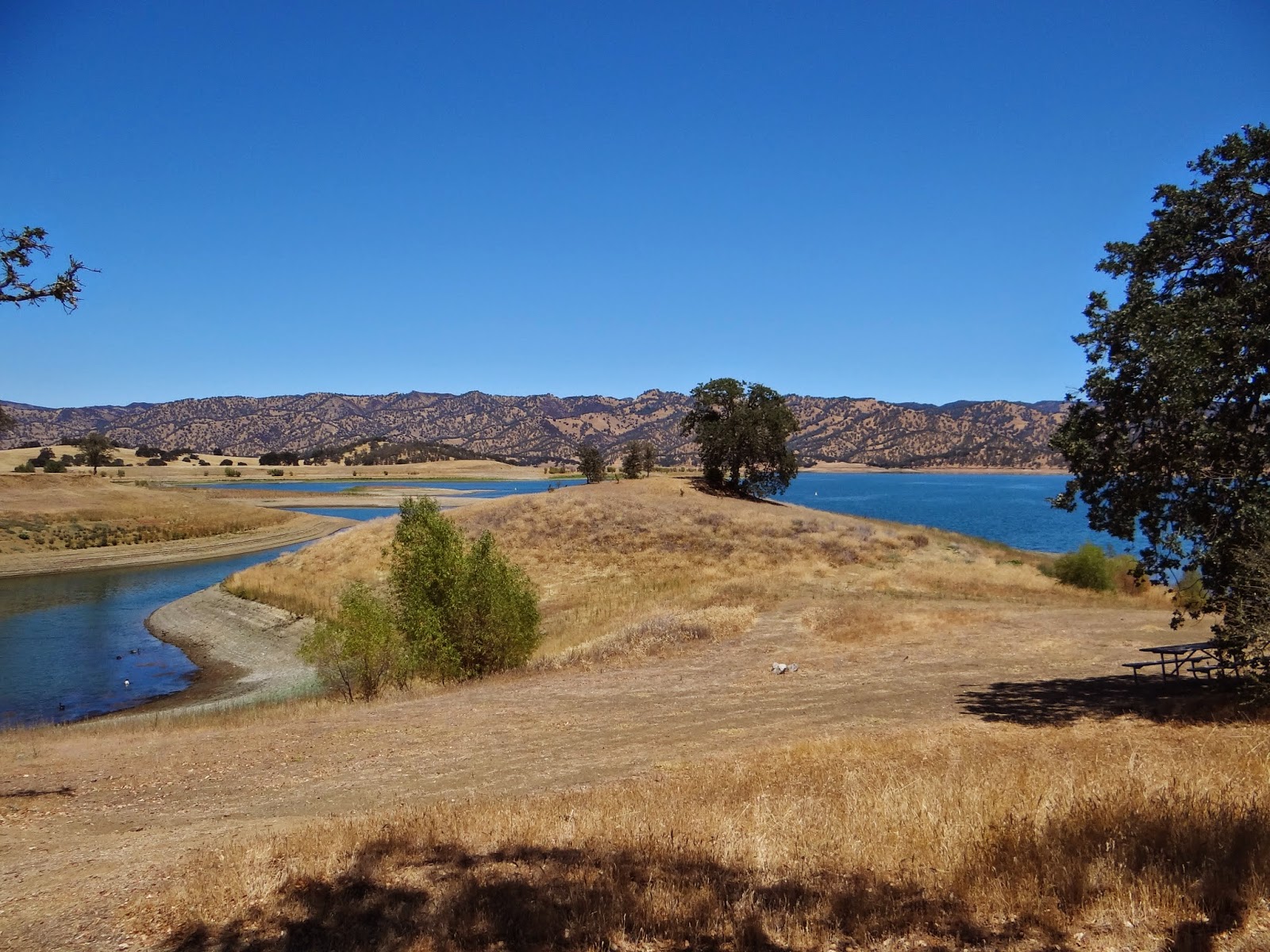 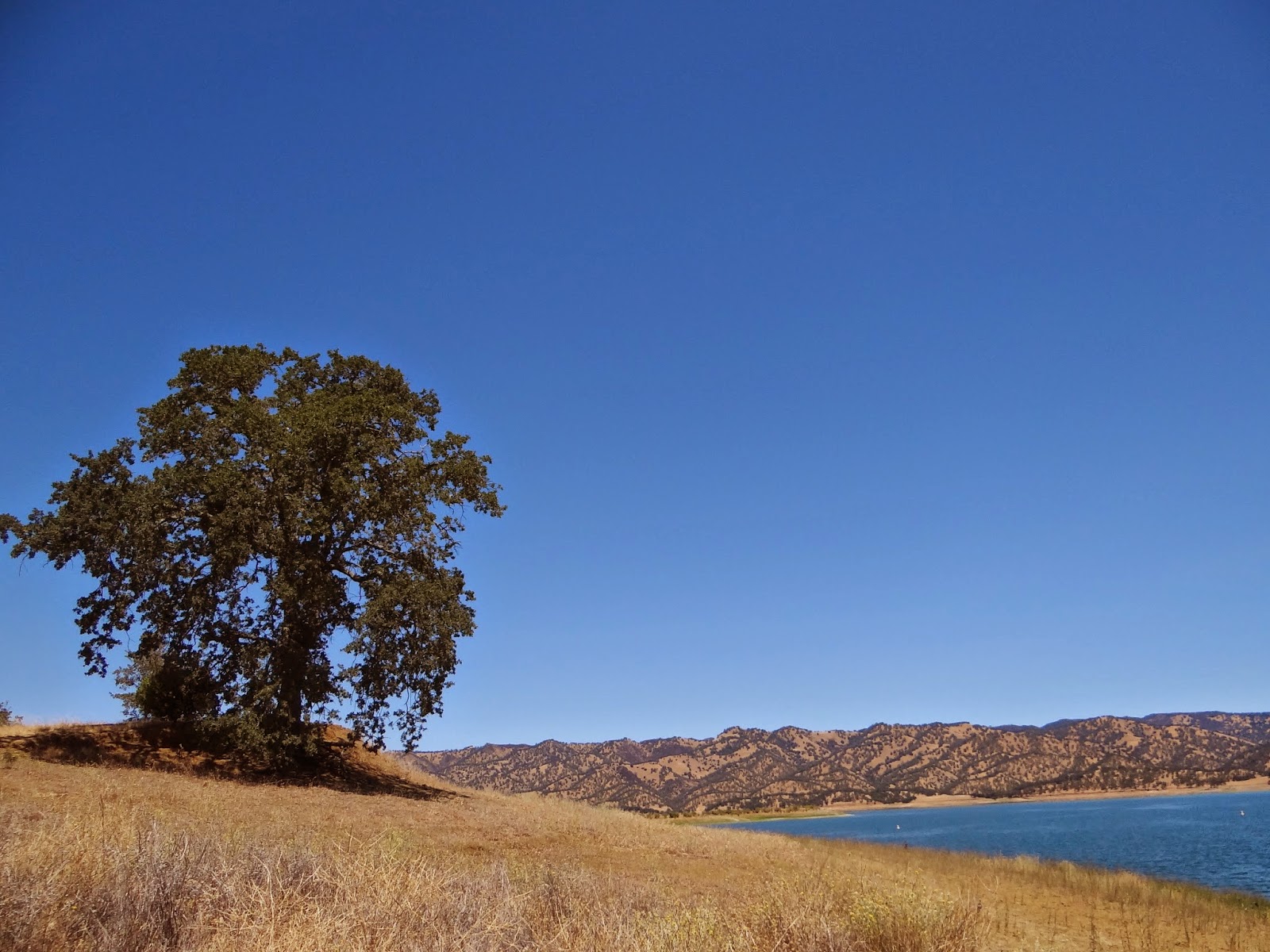 After this we made our way up to North San Juan, where we were staying at Pleasant Valley Sanctuary Yoga Retreat for the next two nights.  The drive was fairly long and a lot of the territory is unmapped.  The retreat itself is built in a canyon and we were warned not to use GPS navigation, to instead go by their instructions.  Of course, we figured we would use GPS and would be able to tell when we got there.  The road the retreat is built on actually cuts through the canyon, we were meant to take the second exit onto the road, but Never Lost sent us up the first exit.  We ended up driving down this narrow dirt road, as you may recall, we’re in a Camaro.  We stopped to figure out our bearings when a pickup truck came up behind us.  Luckily for this local who explained the geography of the road for us, apparently not much further and we would have been stuck for good.  It was no easy task turning the car around.  We did make it to our accommodations though.  More on that tomorrow!